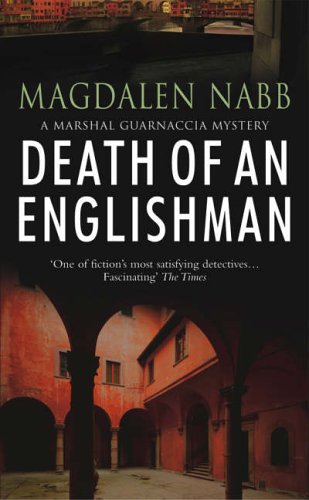 Death Of An Englishman
by Magdalen Nabb

Out of Stock
Introducing Marshal Salvatore Guarnaccia of the Florentine carabinieri, a Sicilian stationed far from home. Most importantly for the marshal, ever the Italian, will he be able to solve the crime in time to join his family over the holiday season?
Very Good
Only 0 left

Death Of An Englishman Summary

Death Of An Englishman by Magdalen Nabb

Introducing Marshal Salvatore Guarnaccia of the Florentine carabinieri, a Sicilian stationed far from home. He wants to go south for Christmas to spend the holiday with his family, but he is laid up with the 'flu. At this awkward moment, the death of a retired Englishman is reported. A most inconvenient time for a murder case. Who has shot Mr Langley-Smythe in the back? And why has Scotland Yard felt it appropriate to send two detectives, one of whom speaks no Italian, to 'help' the marshal and his colleagues with their investigation? Most importantly for the marshal, ever the Italian, will he be able to solve the crime in time to join his family over the holiday season? This first book in the ever popular detective series is a wonderfully evocative piece of crime fiction and quasi-travel writing, as the reader is immediately transported into the heart of Florence, one of Italy's most beautiful cities.

Death Of An Englishman Reviews

"Nabb peels back the tourist facade of one of the world's most enchanting cities to reveal greed and lust, violence and depravity... Salvatore Guarnaccia [is] one of the most likeable sleuths to grace crime fiction... A hauntingly atmospheric tragedy" * Glasgow Herald *
"Guarnaccia is one of fiction's most satisfying detectives, a man whose domestic life is as fascinating as his cases... the series began with Death of an Englishman and is distinguished by its superb sense of place" * The Times 'One Hundred Masters of Crime' *
"Magdalen Nabb's books are set in a Florence so vividly brought to life that I long to go back there after reading each one." * Sunday Telegraph *
"Guarnaccia continues to impress as the most convincingly human of modern detectives and his creator as a writer of deep and rare dimension" * Observer *

Magdalen Nabb was born in Lancashire in 1947 and trained as a potter. She lived in Florence from 1975 until 2007, where she pursued a dual career as crime writer and author of children's books. She passed away in August 2007.

GOR001200637
Death Of An Englishman by Magdalen Nabb
Magdalen Nabb
Used - Very Good
Paperback
Cornerstone
2004-02-05
256
0099443341
9780099443346
N/A
Book picture is for illustrative purposes only, actual binding, cover or edition may vary.
This is a used book - there is no escaping the fact it has been read by someone else and it will show signs of wear and previous use. Overall we expect it to be in very good condition, but if you are not entirely satisfied please get in touch with us.