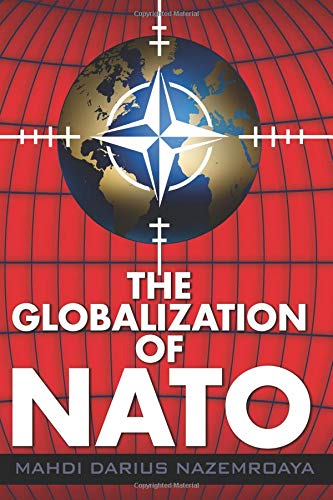 The Globalization of Nato
by Mahdi Darius Nazamroaya

In Stock
£16.99
The world is enveloped in a blanket of perpetual conflict. One organization - North Atlantic Treaty Organization (NATO) - is repeatedly, and very controversially, involved in some form or another in many of these conflicts led by the US and its allies. NATO spawned from the Cold War. This title deals with NATO's globalization.
Very Good
Only 1 left

The Globalization of Nato Summary

The Globalization of Nato by Mahdi Darius Nazamroaya

The world is enveloped in a blanket of perpetual conflict. Invasions, occupation, illicit sanctions, and regime change have become currencies and orders of the day. One organization - North Atlantic Treaty Organization (NATO) - is repeatedly, and very controversially, involved in some form or another in many of these conflicts led by the US and its allies. NATO spawned from the Cold War. Its existence was justified by Washington and Western Bloc politicians as a guarantor against any Soviet and Eastern Bloc invasion of Western Europe, but all along the Alliance served to cement Washington's influence in Europe and continue what was actually the America's post-World War II occupation of the European continent. In 1991 the raison d'etre of the Soviet threat ended with the collapse of the USSR and the end of the Cold War. Nevertheless NATO remains and continues to alarmingly expand eastward, antagonizing Russia and its ex-Soviet allies. China and Iran are also increasingly monitoring NATO's moves as it comes into more frequent contact with them. Yugoslavia was a turning point for the Atlantic Alliance and its mandate. The organization moved from the guise of a defensive posture into an offensive pose under the pretexts of humanitarianism. Starting from Yugoslavia, NATO began its journey towards becoming a global military force. From its wars in the Balkans, it began to broaden its international area of operations outside of the Euro-Atlantic zone into the Caucasus, Central Asia, East Africa, the Middle East, North Africa, and the Indian Ocean. It has virtually turned the Mediterranean Sea into a NATO lake with the NATO Mediterranean Dialogue and the Istanbul Cooperation Initiative, while it seeks to do the same to the Black Sea and gain a strategic foothold in the Caspian Sea region. The Gulf Security Initiative between NATO and the Gulf Cooperation Council seeks to also dominate the Persian Gulf and to hem in Iran. Israel has become a de facto member of the military organization. At the same time, NATO vessels sail the Red Sea and the Gulf of Aden. These warships are deployed off the coasts of Somalia, Djibouti, and Yemen as part of NATO's objectives to create a naval cordon of the seas controlling important strategic waterways and maritime transit routes. The Atlantic Alliance's ultimate aim is to fix and fasten the American Empire. NATO has clearly played an important role in complementing the US strategy for dominating Eurasia. This includes the encirclement of Russia, China, Iran, and their allies with a military ring subservient to Washington. The global missile shield project, the militarization of Japan, the insurgencies in Libya and Syria, the threats against Iran, and the formation of a NATO like military alliance in the Asia-Pacific region are components of this colossal geo-political project. NATO's globalization, however, is bringing together a new series of Eurasian counter-alliances with global linkages that stretch as far as Latin America. The Collective Security Treaty Organization (CSTO) and the Shanghai Cooperation Organization (SCO) have been formed by Russia, China, and their allies as shields against the US and NATO and as a means to challenge them. As the globalization of NATO unfolds the risks of nuclear war become more and more serious with the Atlantic Alliance headed towards a collision course with Russia, China, and Iran that could ignite World War III.

The Globalization of Nato Reviews

"[R}eally necessary to understanding the role of NATO within the frame of long-term US strategy...not only provides an articulate analysis on the Atlantic Alliance: it is the best modern text devoted to the hegemonic alliance." Tiberio Graziani, President, Institute of Advanced Geopolitics
"What amazes many of us in other parts of the world are his seemingly limitless depth, breadth and the thoroughness of his knowledge" Kiyul Chung, Editor-in Chief of The 4th Media and Visiting Professor, Tsinghua University, Beijing.
"Nazemroaya's book is a must-read for any European or other NATO state citizen who wants to understand the danger the American-driven Alliance presents to world harmony and peace." Denis J. Halliday, former UN Assistant Secretary-General, 1994-1998
""The Globalization of NATO by Mahdi Darius Nazemroaya is simply magnificent..." MIGUEL D'ESCOTO BROCKMANN, Former President, United Nations General Assembly
Nazemroaya's book, in addition to reminding us that the role of the United Nations has been confiscated by NATO, elaborates in the danger the North Atlantic Treaty represents to world peace. -Jose L. Gomez del Prado, Chairman, United Nations Working Group on the Use of Mercenaries (2005-2011)"

Mahdi Darius Nazemroaya is a sociologist, award-winning author and noted geopolitical analyst. He is a research associate at the Centre for Research on Globalization in Montreal, Quebec and specializes on the Middle East-North Africa region and Central Asia.

Foreword: NATO IN LIBYA: A Personal Memoire; Preface; Children of the Cold War: NATO and the Warsaw Pact; Post-Cold War Expansion into Eastern Europe; Yugoslavia: A New Mission; The Road to NATO's Global Expansion; NATO Expansion into the Mediterranean and Red Sea; NATO's Partnership for Peace; NATO's Mediterranean Dialogue; NATO in Afghanistan; NATO and the Levant; NATO and Africa; NATO in the Persian Gulf: The Gulf Security Initiative; NATO in the Caucasus and Central Asia: Creeping into the Post Soviet Space; The Militarization of Japan and the Asia-Pacific; NATO's Sister Alliances; Controlling the Indian Ocean; The Naval Cordon of the Seas and Strategic Waterways; The Global Missile Shield Project; The Drive into Eurasia; Encircling Russia, China, Iran, and Central Asia; The Eurasian Counter-Alliances: CSTO and the SCO; Accomplishing the Old Imperialist Project to Divide Libya; A Historical Analysis: America as Rome and NATO as the Peninsular Allies; Militarization and the March towards Global Conflict.

GOR009948132
The Globalization of Nato by Mahdi Darius Nazamroaya
Mahdi Darius Nazamroaya
Used - Very Good
Paperback
Clarity Press
2012-08-30
302
0985271027
9780985271022
N/A
Book picture is for illustrative purposes only, actual binding, cover or edition may vary.
This is a used book - there is no escaping the fact it has been read by someone else and it will show signs of wear and previous use. Overall we expect it to be in very good condition, but if you are not entirely satisfied please get in touch with us.