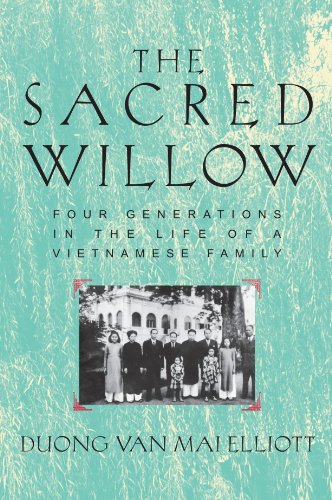 The Sacred Willow
by Mai Elliott

In Stock
£7.99
Tied in to Ken Burns' forthcoming (2017) TV series on Vietnam, to which the author is a major contributor, the reissue of a Pulitzer finalist memoir of a Vietnamese family in the 20th century
Well Read
Only 1 left

The Sacred Willow: Four Generations in the Life of a Vietnamese Family by Mai Elliott

A finalist for the Pulitzer Prize, Duong Van Mai Elliott's The Sacred Willow illuminates recent Vietnamese history by weaving together the stories of the lives of four generations of her family. Beginning with her great-grandfather, who rose from rural poverty to become an influential landowner, and continuing to the present, Mai Elliott traces her family's journey through an era of tumultuous change. She tells us of childhood hours in her grandmother's silk shop, and of hiding while French troops torched her village, watching while blossoms torn by fire from the trees flutter "like hundreds of butterflies" overhead. She makes clear the agonizing choices that split Vietnamese families: her eldest sister left her staunchly anti-communist home to join the Viet Minh, and spent months sleeping in jungle camps with her infant son, fearing air raids by day and tigers by night. And she follows several family members through the last, desperate hours of the fall of Saigon-including one nephew who tried to escape by grabbing the skid of a departing American helicopter. Based on family papers, dozens of interviews, and a wealth of other research, this is not only a memorable family saga but a record of how the Vietnamese themselves have experienced their times.

Mai Elliott was born and raised in Vietnam and attended Georgetown University on a scholarship. She lived in Vietnam again from 1963 to 1968 and worked for the Rand Corporation interviewing Viet Cong prisoners of war. She returned to the U.S. in 1968 and now lives in California.

Preface Acknowledgments Maps Family Tree 1: A Burial in the Night 2: Shut Gate and High Walls 3: The Silk Merchant 4: French Veneer, Confucian Soul 5: Taxes, Floods, and Robbers 6: The Third Month in the Year of the Famine 7: The Head on the Roof 8: Into the Resistance Zone 9: Poison and Bribes 10: The Fall of a Border Garrison 11: Sifting Through the Rubble 12: The New Mecca 13: Just Cause 14: Short Peace, Long War 15: Flying Into the Unknown 16: The Spoils of Victory 17: The Hours of Gold and Jade Epilogue: Across the Four Seas Bibliography Index

GOR005446117
The Sacred Willow: Four Generations in the Life of a Vietnamese Family by Mai Elliott
Mai Elliott
Used - Well Read
Paperback
Oxford University Press
2000-07-01
544
0195137876
9780195137873
N/A
Book picture is for illustrative purposes only, actual binding, cover or edition may vary.
This is a used book. We do our best to provide good quality books for you to read, but there is no escaping the fact that it has been owned and read by someone else previously. Therefore it will show signs of wear and may be an ex library book.