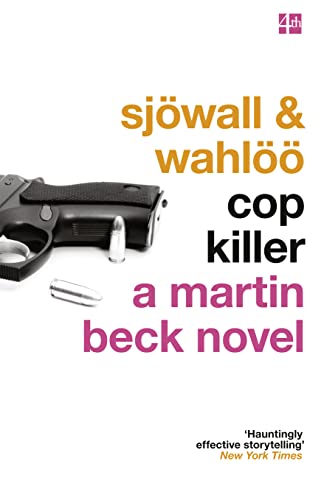 The ninth book in the classic Martin Beck detective series from the 1960s and 70s - the novels that shaped the future of Scandinavian crime writing.

The ninth book in the classic Martin Beck detective series from the 1960s and 70s - the novels that shaped the future of Scandinavian crime writing.

Hugely acclaimed, the Martin Beck series were the original Scandinavian crime novels and have inspired the writings of Stieg Larsson, Henning Mankell and Jo Nesbo.

In a Swedish country town, a woman is brutally murdered and left buried in a swamp. On a quiet suburban street a midnight shootout takes place between three cops and two teenage boys. Detective Inspector Martin Beck and his partner Lennart Kollberg are called in on both cases. In the unfamiliar small-town setting, they encounter figures from their earlier cases...

'Some of the most gripping crime fiction ever written.' Michael Connelly

`If you haven't come across Beck before, you're in for a treat.' Guardian

`Their mysteries don't just read well; they reread even better. Witness, wife, petty cop or crook - they're all real characters even if they get just a few sentences. The plots hold, because they're ingenious but never inhuman.' New York Times

`They changed the genre. Whoever is writing crime fiction after these novels is inspired by them in one way or another.' Henning Mankell

`Pick up one book...and you become unhinged. You want to block out a week of your life, lie to your boss, and stay in bed, gorging on one after another.' Observer

Maj Sjowall and Per Wahloo, both left-wing journalists and politically radical, met in 1961 while working for magazines published by the same company. They married the next year and together created the Martin Beck crime series, famously writing alternate chapters at night after putting their children to bed. Wahloo died at the age of 49 just as their 10th book was going to press. Sjowall currently lives in Sweden and continues to work as a writer and translator. They won the esteemed Edgar Allan Poe Award for Best Crime Fiction Book in 1971.

GOR010309934
Cop Killer (The Martin Beck series, Book 9) by Maj Sjowall
Maj Sjowall
The Martin Beck series
Used - Like New
Paperback
HarperCollins Publishers
2012-01-05
288
0007439199
9780007439195
N/A
Book picture is for illustrative purposes only, actual binding, cover or edition may vary.
This is a used book - there is no escaping the fact it has been read by someone else and it will show signs of wear and previous use. Overall we expect it to be in very good condition, but if you are not entirely satisfied please get in touch with us.