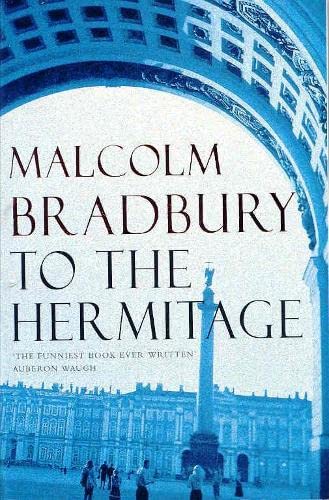 To the Hermitage
by Malcolm Bradbury

In Stock
£4.49
A superbly funny and entertaining novel from a master of modern literature.
Very Good
Only 2 left

To the Hermitage Summary

To the Hermitage by Malcolm Bradbury

To the Hermitage tells two tales: a contemporary story of our narrator, a novelist, who has been invited to Stockholm and then to Russia to take part in what is enigmatically referred to as the Diderot Project, and one set two hundred years earlier in which Bradbury brilliantly recreates Diderot's journey to Russia to entertain and enlighten the mind of that powerful monarch, Catherine the Great.

'To the Hermitage reads like a love letter to the life of the mind from a man who, in his work as a writer, critic, academic and teacher has done much to contribute to that dizzying circulation of ideas which is so richly celebrated here' Independent on Sunday

'A charming, engaging, witty, amusing, playful, reflective and informative book by a writer who is in championship-winning form' Sunday Express

GOR000737955
To the Hermitage by Malcolm Bradbury
Malcolm Bradbury
Used - Very Good
Paperback
Pan Macmillan
2001-03-09
512
0330376632
9780330376631
N/A
Book picture is for illustrative purposes only, actual binding, cover or edition may vary.
This is a used book - there is no escaping the fact it has been read by someone else and it will show signs of wear and previous use. Overall we expect it to be in very good condition, but if you are not entirely satisfied please get in touch with us.