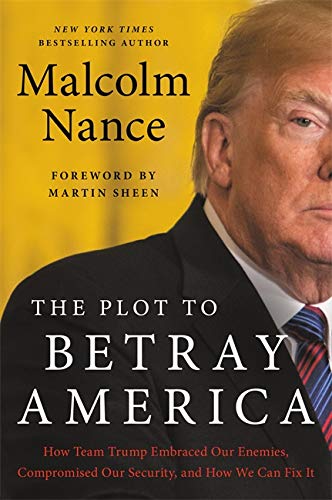 The Plot to Betray America
by Malcolm Nance

Out of Stock
£13.99
Retired intelligence officer and New York Timesbestselling author of The Plot to Hack America and The Plot to Destroy Democracy, Malcolm Nance, offers a searing investigation and spy hunt for the American officials complicit in the Trump-Russia conspiracy and a case for the indictment of Donald Trump.
Very Good
Only 0 left

The Plot to Betray America Summary

The Plot to Betray America: How Team Trump Embraced Our Enemies, Compromised Our Security and How We Can Fix It by Malcolm Nance

MSNBC counterterrorism analyst and New York Times bestselling author Malcolm Nance was the first person to blow the whistle on Russia's hacking of the 2016 election and to reveal Vladmir Putin's masterplan.

Now, in THE PLOT TO COMMIT TREASON, Nance provides a detailed assessment of how Donald Trump lead a cabal of American financial charlatans, political opportunists and power-hungry sycophants to eagerly betray the nation in order to execute a Russian inspired plan to place him, a Kremlin-friendly President in power. It details an evidence-based conspiracy of a ravenously avaricious family leading an administration of political mercenaries who plotted to dismantle 244 years of American democracy and break up the American-led world order since WWII.

Seduced by promises of riches dangled in front of them by Putin, the Trump administration has been was caught trying to use all of its political power to stop investigations by US Intelligence and the Special Counsel to conceal the greatest betrayal in American history: The sale of the American presidency to foreign adversaries. THE PLOT TO COMMIT TREASON will unscramble the framework and strategies used by the Republican Party and non-state conspirators, including Rudy Guiliani, Mitch McConnell, Jeff Sessions, and more.

Nance's in-depth research and interviews with intelligence experts and insiders illustrate Trump's deep financial ties to Russia through his family's investments, the behaviours of his pro-Moscow associates and the carefully crafted seduction of numerous Americans by Russian intelligence led to work with Vladimir Putin to betray the nation.

In what reads like a fast-paced geopolitical spy-thriller, Nance clarifies the spiders web of relationships both personal and financial (including Russia and American based mafia) that lead back to the Kremlin. THE PLOT TO COMMIT TREASON provides a step-by-step blueprint of how and why Trump will be brought to justice.

The Plot to Betray America Reviews

"[Nance] does a good job of showing how the Russian campaign to infiltrate the Trump campaign was staged and was so willingly accepted, with key agents taking roles in the Miss Universe contest, swaying the National Rifle Association, and conning Donald Trump Jr... and the book is timely."--Kirkus Reviews
"Succinctly recapping the many interconnected Trump scandals and instances of irresponsible and dangerous behavior, Nance methodically illuminates established facts and their consequences and offers new revelations and insights in an evidential fashion. The result is sobering, consequential, and urgent."--Booklist
***NEW YORK TIMES BESTSELLER***
AN EXPLOSIVE, REVELATORY ASSESSMENT OF THE GREATEST BETRAYAL IN AMERICAN HISTORY
William Barr - Paul Manafort - Michael Cohen - Steve Bannon - Rudy Giuliani - Mitch McConnell - Roger Stone - George Papadopoulos - Jeff Sessions - And More!

Malcolm Nance is author of the New York Times bestseller The Plot to Hack America and The Plot to Destroy Democracy. He is a globally recognised Intelligence community member and a counter-terrorism analyst for NBC News and MSNBC

GOR010306485
The Plot to Betray America: How Team Trump Embraced Our Enemies, Compromised Our Security and How We Can Fix It by Malcolm Nance
Malcolm Nance
Used - Very Good
Hardback
Little, Brown & Company
2019-11-12
352
0316535761
9780316535762
N/A
Book picture is for illustrative purposes only, actual binding, cover or edition may vary.
This is a used book - there is no escaping the fact it has been read by someone else and it will show signs of wear and previous use. Overall we expect it to be in very good condition, but if you are not entirely satisfied please get in touch with us.