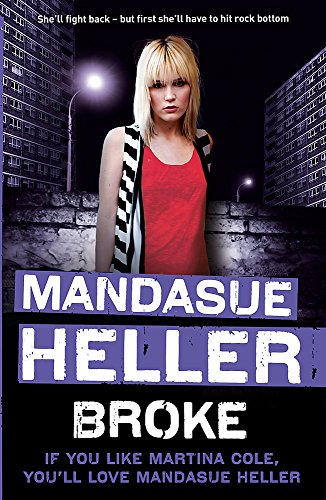 Broke: How far will she go? by Mandasue Heller

Amy's marriage to Mark isn't the best - he can't resist the girls, he can't hold down a job. But she doesn't want to know just how bad things are until his gambling habit brings the debt collector to her door. He makes it brutally clear how she can pay off Mark's debts . . .

And Amy's troubles are only beginning. Someone else wants Mark for herself, and she is ready to steal Amy's man, her self-respect and even her children. As the stakes rise, Amy will either lose everything, or she'll have to learn how to be as hard and ruthless as her enemies . . .

Lost Angel is a shining example of the rule that the best crime fiction isn't just about crime; it's also about family, relationships, love . . . and hate. From The Godfather to The Sopranos, these are the stories that grip us most intensely. And Heller is at the top of her game with this one--it's captivating from first page to last. * Jeffery Deaver on LOST ANGEL *
A hectic pace . . . will please fans of Martina Cole. * Bella on LOST ANGEL *
Mandasue has played a real blinder with this fantastic novel. * Martina Cole on FORGET ME NOT *
Cracking page-turner . . . a gritty compassionate account of life on the margins. * Manchester Evening News on FORGET ME NOT *
'A cracking read that will chill you to the bone.' * Sun on TWO-FACED *
'One of the bad girls of gritty crime, Heller has written a blinder.' * Daily Mirror on TWO-FACED *
'A glamorous nightclub hides a seedy underworld that Heller knows only too well.' * Daily Express on THE CLUB *
Gripping . . . powerful writing. * Scotland on Sunday on FORGET ME NOT *

Mandasue Heller was born in Cheshire and moved to Manchester in 1982. She spent ten years living in the notorious Hulme Crescents which have since become the background to her novels. Not only is she a talented writer, but she has also sung in cabaret and rock groups, seventies soul cover bands and blues jam bands.

GOR004709554
Broke: How far will she go? by Mandasue Heller
Mandasue Heller
Used - Very Good
Hardback
Hodder & Stoughton General Division
2013-01-08
368
0340960124
9780340960127
N/A
Book picture is for illustrative purposes only, actual binding, cover or edition may vary.
This is a used book - there is no escaping the fact it has been read by someone else and it will show signs of wear and previous use. Overall we expect it to be in very good condition, but if you are not entirely satisfied please get in touch with us.