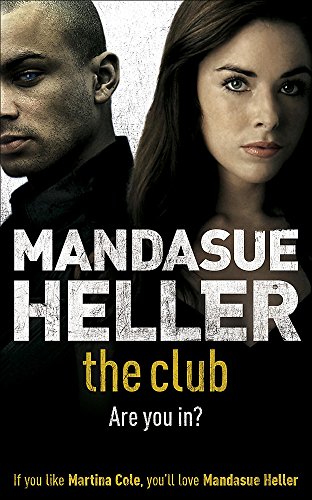 The Club
by Mandasue Heller

In Stock
£5.99
A gritty urban thriller for fans of Martina Cole and Lynda La Plante
Very Good
13 in stock

The Club: a gritty thriller you won't put down by Mandasue Heller

Jenna Lorde knows she's taking on a challenge when she inherits her dad's nightclub.

But Zenith comes with a top class reputation and a location which other clubs would kill for, so she reckons she's more than up for it. Until she starts to realise that the dangers aren't just from other clubs.

Beneath the glamour of the VIP lounge and the pumping music, sleaze and corruption are starting to creep in, and it'll take all Jenna's cunning to stop the rot. The club's survival - and her own - depend on it ...

'Move over Martina Cole, Mandasue Heller is here. Can't wait for her next book' * **** Amazon review *
'Gritty, contemporary, inner-city drama' * Bookseller *
Mandasue has played a real blinder with this fantastic novel. * Martina Cole on FORGET ME NOT *
Cracking page-turner . . . a gritty compassionate account of life on the margins. * Manchester Evening News on FORGET ME NOT *
Alarming and beguiling . . . curiously exhilarating. * Scotsman on THE FRONT *
A hard-hitting tale of sex, drugs and guest lists . . . things turn from glamorous to dangerous. * Marie Claire *
Gripping . . . powerful writing. * Scotland on Sunday on FORGET ME NOT *
A glamorous nightclub hides a seedy underworld that Heller knows only too well. * Express *
A sassy take on the usual crime thriller ... a slick page-turner. * Woman magazine *
Sexy and slick * Look *
Another excellent read from Mandasue Heller * Linnet Hooper, Waterstone's Books Quaterly *

Mandasue Heller was born in Cheshire and moved to Manchester in 1982. She spent ten years living in the notorious Hulme Cresecents. Not only is she a talented writer, but she has also sung in cabaret and rock groups, seventies soul cover bands and blues jam bands.

GOR000540229
The Club: a gritty thriller you won't put down by Mandasue Heller
Mandasue Heller
Used - Very Good
Paperback
Hodder & Stoughton General Division
2007-06-14
576
0340838310
9780340838310
N/A
Book picture is for illustrative purposes only, actual binding, cover or edition may vary.
This is a used book - there is no escaping the fact it has been read by someone else and it will show signs of wear and previous use. Overall we expect it to be in very good condition, but if you are not entirely satisfied please get in touch with us.