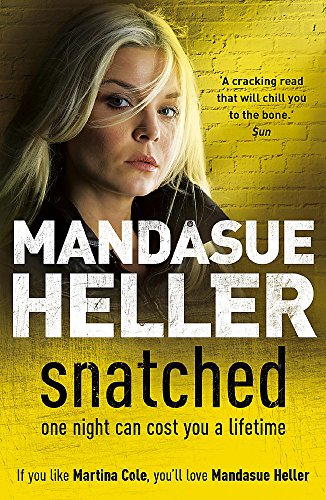 In Stock
£4.49
Can she save both her children? A single mother faces down a ruthless killer on a Manchester estate in Mandasue Heller's thrilling new bestseller.
Very Good Good
Only 3 left

It begins on a winter afternoon, when schoolgirl Nicky Day runs from a gang of bullies. Then her little brother starts the fire. But the nightmare that is engulfing Sue and Terry Day is only beginning . . .

A single mother who left a six-year-old on his own while she went clubbing on a Friday night. An absent father with a hot teenaged girlfriend who didn't seem to care who was minding his former family. The police, the neighbours, the friends, the lovers turn accusing eyes on them both. Suspicious voices ask whether Nicky has run away; whether the fire is really an accident.

And meanwhile, time is running out for Nicky.

Bestselling author Martina Cole loved Mandasue Heller's second novel, Forget Me Not. She wrote, 'Mandasue has played a real blinder with this fantastic novel.' Now thousands of readers have discovered Mandasue Heller. Have you read all her books?

'A cracking read that will chill you to the bone.' * Sun *
'One of the bad girls of gritty crime, Heller has written a blinder.' * Daily Mirror *
Mandasue has played a real blinder with this fantastic novel. * Martina Cole on FORGET ME NOT *
'A glamorous nightclub hides a seedy underworld that Heller knows only too well.' * Daily Express on THE CLUB *
Gripping . . . powerful writing. * Scotland on Sunday on FORGET ME NOT *
Cracking page-turner . . . a gritty compassionate account of life on the margins. * Manchester Evening News on FORGET ME NOT *
Alarming . . . beguiling . . . exhilarating. * Scotsman on THE FRONT *

Mandasue Heller was born in Cheshire and moved to Manchester in 1982. She spent ten years living in the notorious Hulme Cresecents which have since become the background to her novels. Not only is she a talented writer, but she has also sung in cabaret and rock groups, seventies soul cover bands and blues jam bands.

GOR001207370
Snatched by Mandasue Heller
Mandasue Heller
Used - Very Good
Paperback
Hodder & Stoughton General Division
2009-06-11
416
0340899557
9780340899557
N/A
Book picture is for illustrative purposes only, actual binding, cover or edition may vary.
This is a used book - there is no escaping the fact it has been read by someone else and it will show signs of wear and previous use. Overall we expect it to be in very good condition, but if you are not entirely satisfied please get in touch with us.