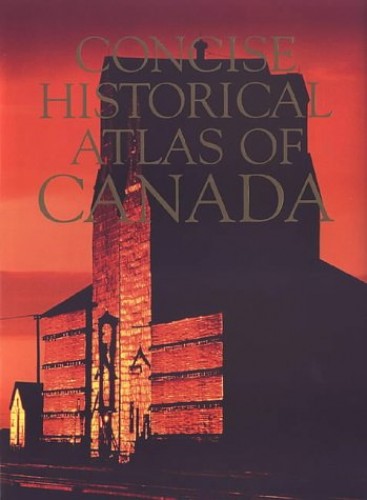 In Stock
£53.99
A distillation of sixty-seven of the best and most important plates from the original three volumes of the bestselling of the Historical Atlas of Canada.
Very Good
Only 1 left

The Concise Historical Atlas of Canada is a beautiful record of Canada's peoples and development. The book combines text and graphic material to create an extraordinarily rich picture of Canada's past, and presents a splendid visual record of the roots of our society and the evolution of the intensely regional, culturally diverse nation we know today. Based on the best-selling three-volume Historical Atlas of Canada, the Concise distills the best and most important plates into a single, comprehensive, thematically organized volume. It represents more than 20 years of collaborative effort between highly accomplished cartographers and a wide range of scholars. The goal of the Concise Historical Atlas of Canada is simple: to summarize Canadian history from prehistory through to the latter part of the twentieth century. To accomplish this goal, the editors selected 67 plates from the nearly 200 plates found in the full set. Each plate is a double-page spread of maps, graphics, legends, and text on a single subject or theme, and is accompanied by a bibliographical note at the end of the volume. Collectively, the plates represent both the crucial events and the continuity of life that made Canada. The editors intend their selection to mirror the social and economic experiences of ordinary people more than the political and military activities associated with individual heroes. While the plates selected from the full three-volume set are used without modification, the Concise Historical Atlas of Canada follows its own organizational structure. Plates have been grouped under three headings: 'National Perspectives,' 'Defining Episodes,' and 'Regional Patterns,' each with a new introductory essay. 'National Perspectives' gives overarching views of the land mass and the process of nation building. Among the topics covered are prehistoric and Native Canada, exploration, the establishment of boundaries, settlement and population patterns, and the development of transportation, urbanization, the economy, and society. 'Defining Episodes' refers to important historical events such as dramatic migrations, wars, and depressions - turning points of national importance. 'Regional Patterns' focuses on smaller parts of the Canadian experience, presents specific case studies of historical trends, and considers events and developments in greater detail over limited periods. The Concise Historical Atlas of Canada is a unique tribute to our history and a significant contribution to Canadians' understanding of one another. It provides a comprehensive overview of the life of ordinary people, one that can as usefully be read for pleasure as for research. Fully cross-referenced, it also serves as a guide to the three-volume set enabling readers to pursue topics of special interest in greater depth.

'It's far more than maps, charts, tables, and graphs. Sidebar essays illuminate the diverse data, for example, of Indian treaties and reservations, of agricultural expansion, mining exploration, and forest usage, of transport infrastructure and competence, of manufacturing and merchandising progress, of urban growth and variations in ethnic, religious, and linguistic profiles of the country and its regions. A stimulating blockbuster.'

'An accessible up-to-date interpretation of our country's history through maps and graphs.'

'A thing of beauty and a mine of information.'

'This is a splendid accomplishment. The scholarship is impeccable. The maps are beautiful and the design is first-rate. Everything is done with imaginative flair.'

'The series is a magnificent compilation of graphs, charts, paintings, and scholarship. It took more than 500 people, from support staff to experts, from across Canada, managed out of a fluorescent-lit basement at the University of Toronto, almost two decades to do.'

- Val Ross - The Globe and Mail

'If you think of an atlas as a collection of conventional maps, this book will make your head spin.'

'An awesome achievement, a cartographic masterpiece in which one can easily get lost.'

'The text, the pictures, the diagrams and charts are welcome tools for teachers and should be part of every school library.'

'This is no ordinary atlas, full of boilerplate information on provincial boundaries, capital cities, and transportation routes. It is not still-life cartography; it is dynamic, designed to convey "changing socio-economic patterns over time in the lives of ordinary people."'

'What sets the book in a class of its own is the astonishingly diverse areas that it addresses.'

'A major publishing event, a cartographic milestone and a new chapter in the exploration of Canadian history and geography.'

'A beautifully designed book, this atlas is an essential contribution to North American history.'

'The sheer complexity of the undertaking, range of topics, depth of scholarship, revelation of detail, and ingenuity of presentation all continue to impress.'

About Maps by Geoffrey J. Matthews

GOR009971156
Concise Historical Atlas of Canada by Maps by Geoffrey J. Matthews
Maps by Geoffrey J. Matthews
Used - Very Good
Hardback
University of Toronto Press
1998-07-31
228
0802042031
9780802042033
N/A
Book picture is for illustrative purposes only, actual binding, cover or edition may vary.
This is a used book - there is no escaping the fact it has been read by someone else and it will show signs of wear and previous use. Overall we expect it to be in very good condition, but if you are not entirely satisfied please get in touch with us.