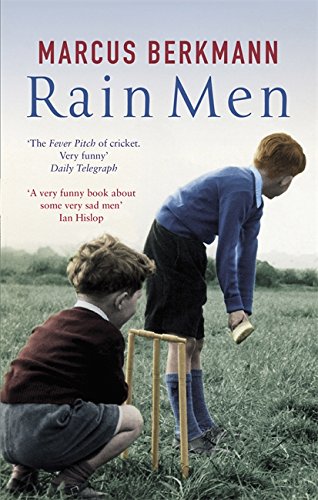 In Stock
£3.99
* The most hilarious book ever written about amateur cricket.
Very Good
9 in stock

There are many cricket books, and they are all the same. 'Don't Tell Goochie', autobiographical insights of nights on the tiles in Delhi with Lambie and the boys; 'Fruit cake days', a celebrated humourist recalls 'ball' - related banter of yore; and Wisden, a deadly weapon when combined with a thermos flask. Rain Men is different. Like the moment the genius of Richie Benaud first revealed itself to you, it is a cricketing epiphany, a landmark in the literature of the game.

Shining the light meter of reason into cricket's incomparable madness, Marcus Berkmann illuminates all the obsessions and disappointments that the dedicated fan and pathologically hopeful clubman suffers year after year - the ritual humiliation of England's middle order, the partially-sighted umpires, the battling average that reads more like a shoe size. As satisfying as a perfectly timed cover drive, and rather easier to come by, Rain Men offers essential justification for anyone who has ever run a team-mate out on purpose or secretly blubbed at a video of Botham's Ashes.

The Fever Pitch of cricket. Very funny * DAILY TELEGRAPH *
Many thousands of cricketers will be able to identify with Marcus Berkmann's marvellous Rain Men. A masterpiece -- Sir Tim Rice
A very funny book about some very sad men -- Ian Hislop
It captures splendidly the many dazzingling facets of the truly atrocious cricketer * OBSERVER *
For addicts with a low batting average - i.e. most cricket lovers * GUARDIAN *
This wonderfully funny book reads like an inside account of a secret cult, its members tinged with guilt, shame and a curious defiant pride * INDEPENDENT ON SUNDAY *
Delightfully tongue in cheek * SUNDAY TELEGRAPH *

Marcus Berkmann has spent more than thirty years sitting in front of various television screens swearing at incompetent England batsmen. In his leisure time he has written columns on sport for Punch, the Independent on Sunday and the Daily Express. He is a regular contributor to Private Eye and film critic of the Oldie, and writes book reviews for the Daily Mail. His books include Rain Men: The Madness of Cricket, Zimmer Men: The Trials and Tribulations of the Ageing Cricketer, Fatherhood: The Truth and A Matter of Facts: The Insider's Guide to Quizzing.

GOR001210734
Rain Men by Marcus Berkmann
Marcus Berkmann
Used - Very Good
Paperback
Little, Brown Book Group
1996-04-04
256
0349107424
9780349107424
N/A
Book picture is for illustrative purposes only, actual binding, cover or edition may vary.
This is a used book - there is no escaping the fact it has been read by someone else and it will show signs of wear and previous use. Overall we expect it to be in very good condition, but if you are not entirely satisfied please get in touch with us.