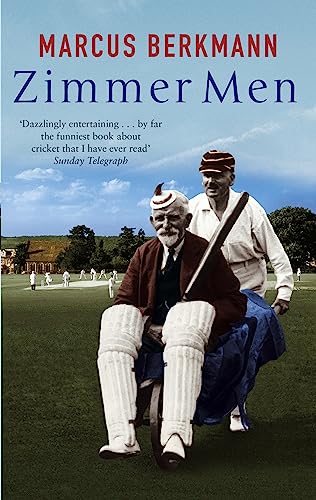 In Stock
£3.99
The pains of the ageing cricketer revealed in the hilarious sequel to RAIN MEN (about the appalling Captain Scott Invitation XI - named after the model of heroic failure).
Very Good
9 in stock

Zimmer Men: The Trials and Tribulations of the Ageing Cricketer by Marcus Berkmann

Ten years after his classic Rain Men - 'cricket's answer to Fever Pitch,' said the Daily Telegraph - Marcus Berkmann returns to the strange and wondrous world of village cricket, where players sledge their team-mates, umpires struggle to count up to six, the bails aren't on straight and the team that fields after a hefty tea invariably loses. This time he's on the trail of the Ageing Cricketer, having suddenly realised that he is one himself and playing in a team with ten others every weekend. In their minds they run around the field as fast as ever; it's only their legs that let them down. ZIMMER MEN asks all the important questions of middle-aged cricketers. Why is that boundary rope suddenly so far away? Are you doomed to getting worse as a cricketer, or could you get better? How many pairs of trousers will your girth destroy in one summer? Chronicling the 2004 season, with its many humiliating defeats and random injuries, this coruscatingly funny new book laughs in the face of middle age, and starts thinking seriously about buying a convertible.

A book about, and for, anyone whose dreams outreach their abilities * GUARDIAN *
[a] humorous masterpiece to treasure * INDEPENDENT ON SUNDAY *
Berkmann's observation and wit reveals all that's truly great about cricket and the spirit of the sport. The Game of Life as it should be played. * LADS MAG *
Berkmann's acute powers of observation, especially of the ageing male species, are cutting but accurate. And under his penmanship the generalisation is wholly reasonable. * INDEPENDENT *

Marcus Berkmann has spent more than thirty years sitting in front of various television screens swearing at incompetent England batsmen. In his leisure time he has written columns on sport for Punch, the Independent on Sunday and the Daily Express. He is a regular contributor to Private Eye and film critic of the Oldie, and writes book reviews for the Daily Mail. His books include Rain Men: The Madness of Cricket, Zimmer Men: The Trials and Tribulations of the Ageing Cricketer, Fatherhood: The Truth and A Matter of Facts: The Insider's Guide to Quizzing.

GOR000825819
Zimmer Men: The Trials and Tribulations of the Ageing Cricketer by Marcus Berkmann
Marcus Berkmann
Used - Very Good
Paperback
Little, Brown Book Group
2006-07-06
256
0349119155
9780349119151
Long-listed for Cricket Society Book of the Year Award 2006 (UK)
Book picture is for illustrative purposes only, actual binding, cover or edition may vary.
This is a used book - there is no escaping the fact it has been read by someone else and it will show signs of wear and previous use. Overall we expect it to be in very good condition, but if you are not entirely satisfied please get in touch with us.