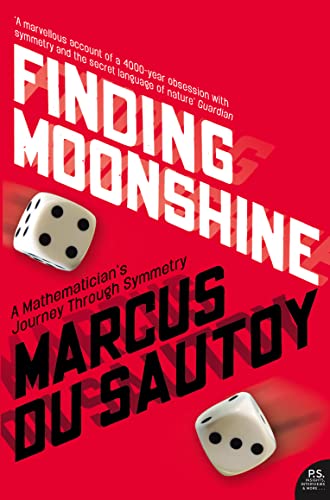 This new book from the author of 'The Music of the Primes' combines a personal insight into the mind of a working mathematician with the story of one of the biggest adventures in mathematics: the search for symmetry.

This new book from the author of 'The Music of the Primes' combines a personal insight into the mind of a working mathematician with the story of one of the biggest adventures in mathematics: the search for symmetry.

This is the story of how humankind has come to its understanding of the bizarre world of symmetry - a subject of fundamental significance to the way we interpret the world around us.

Our eyes and minds are drawn to symmetrical objects, from the sphere to the swastika, the pyramid to the pentagon. Symmetry indicates a dynamic relationship or connection between objects, and it is all-pervasive: in chemistry and physics the concept of symmetry explains the structure of crystals or the theory of fundamental particles; in evolutionary biology, the natural world exploits symmetry in the fight for survival; symmetry and the breaking of symmetry are central to ideas in art, architecture and music; the mathematics of symmetry is even exploited in industry, for example to find efficient ways to store more music on a CD or to keep your mobile phone conversation from cracking up through interference.

Marcus du Sautoy constantly strives to push his own boundaries to find ways in which to share the excitement of mathematics with a broader audience; this book charts his own personal quest to master one of the most innate and intangible concepts, and to demonstrate the intricacy and beauty of the world around us.

'If you don't experience a thrill of foreboding as du Sautoy ventures into this twilit territory, nothing in maths will be for you. Even if the thought of sitting down to a quintic equation makes you want to cry, it would still be hard to resist Moonshine's cocktail of anecdote, swashbuckling potted history and haphazard self-revelation. The moments of autobiographical intimacy bring the book to life...a joy.' Daily Telegraph

'Mesmerising...articulate, fluent, funny and personable, [du Sautoy] is also absolutely passionate about mathematics, with a burning desire to make the rest of us as excited as he is about its problems, its patterns and its beauty. He captures for us with brilliant vividness the excitement of the pursuit of a solution to a difficult problem.' Lisa Jardine, Sunday Times

Marcus du Sautoy is Professor of Mathematics at the University of Oxford and a fellow of Wadham College. He has been named by the Independent on Sunday as one of the UK's leading scientists, has written extensively for the Guardian, The Times and the Daily Telegraph and has appeared on Radio 4 on numerous occasions. He is the author of `The Music of the Primes' and has presented `Mind Games' and `Music of the Primes' on BBC television. He was the Royal Institution Christmas lecturer in 2006, broadcast on Channel 5, and is filming `The Story of Maths' for the BBC. In October 2008 he was appointed to Oxford University's prestigious professorship as the Simonyi Chair for the Public Understanding of Science, a post previously held by Richard Dawkins. He lives in London with his wife and three children.

GOR001204299
Finding Moonshine: A Mathematician's Journey Through Symmetry by Marcus du Sautoy
Marcus du Sautoy
Used - Very Good
Paperback
HarperCollins Publishers
2009-05-14
400
0007214626
9780007214624
N/A
Book picture is for illustrative purposes only, actual binding, cover or edition may vary.
This is a used book - there is no escaping the fact it has been read by someone else and it will show signs of wear and previous use. Overall we expect it to be in very good condition, but if you are not entirely satisfied please get in touch with us.