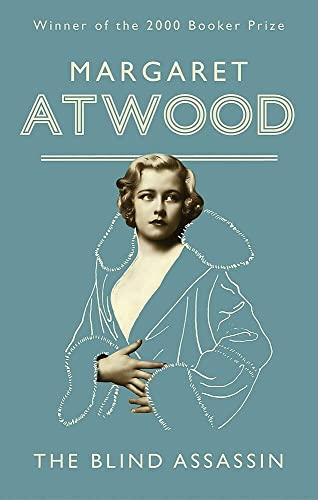 The Blind Assassin
by Margaret Atwood

The Blind Assassin by Margaret Atwood

Laura Chase's older sister Iris, married at eighteen to a politically prominent industrialist but now poor and eighty-two, is living in Port Ticonderoga, a town dominated by their once-prosperous family before the First War. While coping with her unreliable body, Iris reflects on her far from exemplary life, in particular the events surrounding her sister's tragic death. Chief among these was the publication of The Blind Assassin, a novel which earned the dead Laura Chase not only notoriety but also a devoted cult following.
Sexually explicit for its time, The Blind Assassin describes a risky affair in the turbulent thirties between a wealthy young woman and a man on the run. During their secret meetings in rented rooms, the lovers concoct a pulp fantasy set on Planet Zycron. As the invented story twists through love and sacrifice and betrayal, so does the real one; while events in both move closer to war and catastrophe. By turns lyrical, outrageous, formidable, compelling and funny, this is a novel filled with deep humour and dark drama.

Atwood has never written with more flair and versatility than in this multidimensional novel. Adding sardonic wit and characterisation that takes you into the ambivalent intricacies of a personality, this is a novel of extraordinary variety and reach. A brilliant accomplishment * Peter Kemp, SUNDAY TIMES *
The fertility of Atwood's imagination is something extraordinary...The only thing familiar about The Blind Assassin is its technical accomplishment and exhilarating emotional power. Everything else is sparkling new * Kathryn Hughes, SUNDAY TELEGRAPH *
Margaret Atwood is one of the most brilliant and unpredictable novelists alive * Kate Kellaway, LITERARY REVIEW *
With every year and every novel, Atwood's subjects get bigger...her new novel is so rich thematically and so convincing psychologically... THE BLIND ASSASSIN may indeed prove to be that most elusive of literary unicorns * Elaine Showalter, NEW STATESMAN *

GOR000345314
The Blind Assassin by Margaret Atwood
Margaret Atwood
Used - Very Good
Paperback
Little, Brown Book Group
2001-08-01
656
1860498809
9781860498800
Winner of Booker Prize for Fiction 2000 Short-listed for IMPAC Dublin Literary Award 2002 Short-listed for International IMPAC Dublin Literary Award 2002 Short-listed for Orange Prize for Fiction 2001
Book picture is for illustrative purposes only, actual binding, cover or edition may vary.
This is a used book - there is no escaping the fact it has been read by someone else and it will show signs of wear and previous use. Overall we expect it to be in very good condition, but if you are not entirely satisfied please get in touch with us.