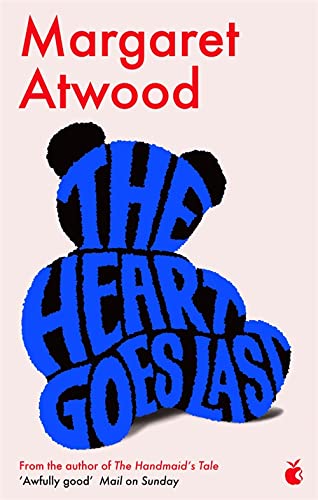 In Stock
£4.49
Grace Stan and Charmaine are a married couple trying to stay afloat in the midst of economic and social collapse. Living in their car, surviving on tips from Charmaine's job at a dive bar, they're increasingly vulnerable to roving gangs and in a rather desperate state.
Very Good Good Well Read
55 in stock

Stan and Charmaine are a married couple trying to stay afloat in the midst of economic and social collapse. Living in their car, surviving on tips from Charmaine's job at a dive bar, they're increasingly vulnerable to roving gangs and in a rather desperate state. So when they see an advertisement for the Positron Project in the town of Consilience - a 'social experiment' offering stable jobs and a home of their own - they sign up immediately. All they have to do in return for this suburban paradise is give up their freedom every second month, swapping their home for a prison cell.

At first, all is well. But slowly, unknown to the other, Stan and Charmaine develop a passionate obsession with their counterparts, the couple that occupy their home when they are in prison. Soon the pressures of conformity, mistrust, guilt and sexual desire take over, and Positron looks less like a prayer answered and more like a chilling prophecy fulfilled.

Gloriously madcap . . . You only pause in your laughter when you realise that, in its constituent parts, the world she depicts here is all too horribly plausible -- Stephanie Merritt * Observer *
Her eye for the most unpredictable caprices of the human heart and her narrative fearlessness have made her one of the world's most celebrated novelists -- Naomi Alderman * Guardian *
The bestselling author who shot to fame 30 years ago with The Handmaid's Tale is still at her darkly comic best * Sunday Times *
Atwood's gift is to take what's already out there and nudge it to the next level . . . The Heart Goes Last is all at once thrilling, funny, grim - and shockingly convincing -- Erica Wagner * Harper's Bazaar *
What distinguishes Atwood's apocalypticism is her insistence that we have brought it on ourselves. It's not meteor strikes, or aliens that destroy our world. It's us . . . I loved it -- John Sutherland * The Times *
Jubilant comedy of errors, bizarre bedroom farce, SF prison-break thriller, psychedelic sixties crime caper: The Heart Goes Last scampers in and out of all of these genres, pausing only to quote Milton on the loss of Eden or Shakespeare on weddings. Meanwhile, it performs a hard-eyed autopsy on themes of impersonation and self-impersonation, revealing so many layers of contemporary deception and self-deception that we don't know whether to laugh or cry * Guardian *
This visceral study of desperation and desire journeys into the dark heart of greed, exploitation and brutality, as it portrays a project that is "an infringement of individual liberties, an attempt at total social control, an insult to the human spirit". It is filled with passages of great intellectual and emotional acuity, appealing both to the head and to the heart -- Anita Sethi * Observer *

GOR007681838
The Heart Goes Last by Margaret Atwood
Margaret Atwood
Used - Very Good
Paperback
Little, Brown Book Group
2016-08-04
432
0349007292
9780349007298
Winner of The Kitschies Red Tentacle 2016 (UK) Long-listed for International Dublin Literary Award 2017 (UK)
Book picture is for illustrative purposes only, actual binding, cover or edition may vary.
This is a used book - there is no escaping the fact it has been read by someone else and it will show signs of wear and previous use. Overall we expect it to be in very good condition, but if you are not entirely satisfied please get in touch with us.