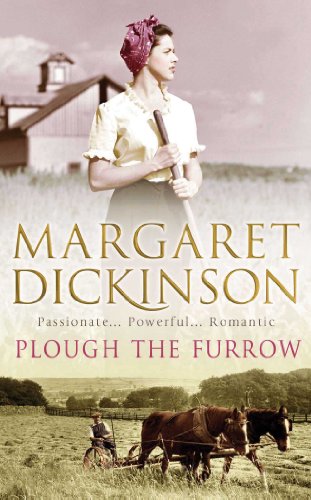 Plough the Furrow
by Margaret Dickinson

Plough the Furrow by Margaret Dickinson

Lincolnshire, 1910. Shunned by her own family, desperate for work a place to stay, Esther Everatt walks through the night to Sam Brumby's farm, seeking the chance to earn her keep. Reluctantly, the old man takes her on.

Able to work alongside any man, Esther soon earns Sam's grudging respect and affection, and at last feels she has found a home she can call her own. But her peace and security are cruelly shattered when old Sam dies: as a woman, she has no right to inherit the lease on the farm.

Believing that her passion lies solely with the land and a place of her own, Esther prepares to risk everything to secure her future - seeking marriage with a local farmhand. But as war arrives to dash the hopes of a generation, Esther begins to discover that it is only the truest of love that can survive the passing of the seasons . . .

Born in Gainsborough, Lincolnshire, Margaret Dickinson moved to the coast at the age of seven and so began her love for the sea and the Lincolnshire landscape. Her ambition to be a writer began early and she had her first novel published at the age of twenty-five. This was followed by over twenty further titles including Plough the Furrow, Sow the Seed and Reap the Harvest, which make up her Lincolnshire Fleethaven trilogy.

GOR000499666
Plough the Furrow by Margaret Dickinson
Margaret Dickinson
Used - Very Good
Paperback
Pan Macmillan
1994-09-09
512
0330333798
9780330333795
N/A
Book picture is for illustrative purposes only, actual binding, cover or edition may vary.
This is a used book - there is no escaping the fact it has been read by someone else and it will show signs of wear and previous use. Overall we expect it to be in very good condition, but if you are not entirely satisfied please get in touch with us.