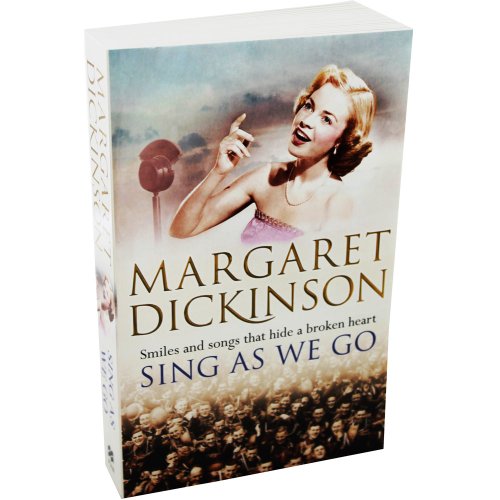 Sing As We Go
by Margaret Dickinson

In Stock
£4.49
A rich and compelling wartime saga from the author of Wish Me Luck
Very Good
5 in stock

Sing As We Go Summary

Sing As We Go by Margaret Dickinson

Kathy Burton longs to escape the drudgery of her life as an unpaid labourer on her father's farm. With only the local church choir and the occasional dance at the village hall for amusement, she yearns for the bright lights. Spurning Morry Robinson's proposal of marriage, Kathy goes to live in the city with his aunt, Jemima Robinson. In turn, she finds employment for Kathy in a department store, but is anxious when Kathy is captivated by the sophisticated and handsome floor manager, Tony Kendall.

`He has a reputation,' the outspoken Jemima warns her. `He's had more girl friends than I've got shoes in my closet.'

Kathy has fallen deeply and irrevocably in love and, even when the country is plunged into war, she can see no obstacle to their future. But she has reckoned without the devious mind of Tony's invalid mother, Beatrice Kendall.

Determined that the possessive woman won't win, Kathy plans her wedding, but the day is ruined and Tony is called up before another date can be arranged. Feeling deserted, Kathy is forced to face yet further heartache and shame alone. At last, she finds solace in joining a concert party entertaining service men and woman and war workers. But behind the songs and the smiles, her heart is breaking . . .

Born in Gainsborough, Lincolnshire, Margaret Dickinson moved to the coast at the age of seven and so began her love for the sea and the Lincolnshire landscape. Her ambition to be a writer began early and she had her first novel published at the age of twenty-five. This was followed by many further titles including Plough the Furrow, Sow the Seed and Reap the Harvest, which make up her Lincolnshire Fleethaven Trilogy. She is also the author of Fairfield Hall, Jenny's War and The Clippie Girls. Margaret is a Sunday Times Top Ten bestseller.

GOR000714953
Sing As We Go by Margaret Dickinson
Margaret Dickinson
Used - Very Good
Paperback
Pan Macmillan
2008-03-07
464
0330452622
9780330452625
N/A
Book picture is for illustrative purposes only, actual binding, cover or edition may vary.
This is a used book - there is no escaping the fact it has been read by someone else and it will show signs of wear and previous use. Overall we expect it to be in very good condition, but if you are not entirely satisfied please get in touch with us.