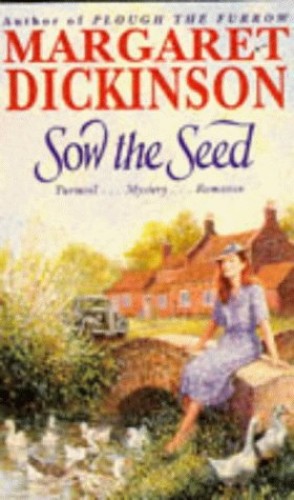 Sow the Seed
by Margaret Dickinson

Sow the Seed by Margaret Dickinson

Lincolnshire, 1926. Kate Hilton is devastated when he mother tells her she is to be sent away to boarding school. For the more Esther tries to keep her from her childhood sweetheart, Danny, the more determined she is to marry him.

It isn't until she is eighteen, and finally told the bitter truth about her family's past, that Kate is forced to see why she and Danny can never marry. Torn apart by these revelations, Kate finds unexpected release with the outbreak of war, when she leaves Fleethaven Point to become a driver in the WAAF.

In the chaos and destruction of the war years, Kate will witness many things. For as well as all the pain, suffering and loss, she will experience her first taste of a love that finally allows her to leave the past behind...

Born in Gainsborough, Lincolnshire, Margaret Dickinson moved to the coast at the age of seven and so began her love for the sea and the Lincolnshire landscape. Her ambition to be a writer began early and she had her first novel published at the age of twenty-five. This was followed by over twenty further titles including Plough the Furrow, Sow the Seed and Reap the Harvest, which make up her Lincolnshire Fleethaven trilogy.

GOR000500106
Sow the Seed by Margaret Dickinson
Margaret Dickinson
Used - Very Good
Paperback
Pan Macmillan
1995-09-08
464
0330331396
9780330331395
N/A
Book picture is for illustrative purposes only, actual binding, cover or edition may vary.
This is a used book - there is no escaping the fact it has been read by someone else and it will show signs of wear and previous use. Overall we expect it to be in very good condition, but if you are not entirely satisfied please get in touch with us.