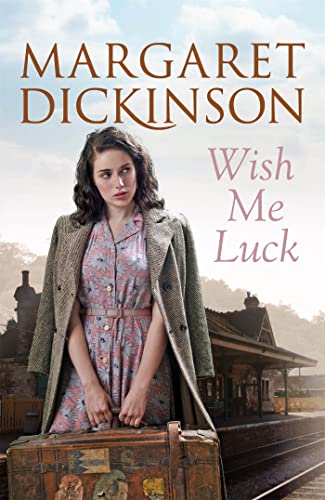 Wish Me Luck
by Margaret Dickinson

Wish Me Luck by Margaret Dickinson

Wish Me Luck is an engrossing romantic saga by Margaret Dickinson, and sequel to Without Sin.

Fleur Bosley didn't believe in love at first sight, at least not until she bumped into Robbie Rodwell on a railway station in the blackout of wartime Britain. Posted to a newly-built Lincolnshire airfield, Robbie as a wireless operator on bombers and Fleur as a R/T operator in the watch office, their only escape is to the little cottage in the nearby village where Fleur is billeted with another WAAF, Ruth. The two girls become good friends, but Ruth, already hurt by the loss of one of the pilots, does not approve of wartime romances.

And Ruth is not the only one to disapprove. When Fleur's mother hears Robbie's name she becomes hysterical and bans him from her home. The young couple are determined to grab their happiness where they can, but is it a kind Fate or a cruel one that has brought them together when secrets from the past threaten their future?

Away from their families, there is fun and laughter, the aircrews determined to make the most of every day, every minute, but whenever they fly off into the night on a bombing raid, Fleur must keep watch until the early hours praying that Robbie's plane comes back . . .

Margaret Dickinson is the author of top twenty bestsellers Jenny's War and The Clippie Girls.

Born in Gainsborough, Lincolnshire, Margaret moved to the coast at the age of seven and so began her love for the sea and the Lincolnshire landscape. Her ambition to be a writer began early and she had her first novel published at the age of twenty-five. This was followed by many further titles, many of which are set in the heart of her home country. A visit to the wonderful National Tramway Museum in Crich, Derbyshire, inspired The Clippie Girls and the magnificent Gunby Hall, Lincolnshire, was the inspiration for Fairfield Hall.

GOR008605167
Wish Me Luck by Margaret Dickinson
Margaret Dickinson
Used - Like New
Paperback
Pan Macmillan
2014-02-01
448
1447245385
9781447245384
N/A
Book picture is for illustrative purposes only, actual binding, cover or edition may vary.
The book has been read, but looks new. The book cover has no visible wear, and the dust jacket is included if applicable. No missing or damaged pages, no tears, possible very minimal creasing, no underlining or highlighting of text, and no writing in the margins.