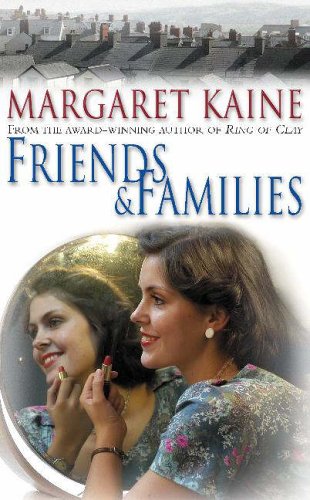 Friends and Families
by Margaret Kaine

In Stock
£3.99
This touching new novel from the prize-winning author of ROSEMARY and A GIRL OF HER TIME follows the hopes and dreams of two girls growing up during the 1950s.
Very Good
Only 3 left

Friends and Families by Margaret Kaine

Two girls - one street. Two families across a social divide.

As a child, Josie Ford, fiery and ambitious, sees from a distance the affluent lifestyle of young Georgina Hawkins, and is filled with envy. But Georgina is lonely, and longs to experience the warmth of working-class family life. Beneath the shadow of Georgina's father, the domineering William Hawkins, the two girls meet in secret. From this forbidden friendship grows a bond so strong nothing can break it.

And then the men enter their lives. Josie falls unwillingly in love with Nick. For as a market trader, surely he can't offer her the lifestyle she now craves? Georgina, an incurable romantic, falls in love with the first man she meets. But the mysterious Dominic breaks her heart. And now both girls need their friendship as never before.

'As always with Margaret kaine, the characters are keenly observed and recognisable. It is the interplay between them which makes her books so readable.' Leicester Mercury (Friends and Families) * - *
'A compelling story' * The Sunday World Magazine on FRIENDS AND FAMILIES - February 2005 *
'A riveting story, absorbingly told.' Ireland on Sunday on ROSEMARY
'Kaine has a gift for storytelling.' Woman's Way on RING OF CLAY
'A wonderfully fast moving read with an eye-catching plot brilliantly portrayed.' North Wales Chronicle on RING OF CLAY
'A perfect novel . . . Kaine is great at conveying the tough times following the Second World War. Beth is an inspiring heroine, and readers will love her rise from rags to riches.' Irish Tatler on RING OF CLAY
'Kaine is a fantastic storyteller and has a knack for connecting with the reader and making her characters seem true to life.' Woman's Way on ROSEMARY

Born and educated in Stoke-on-Trent, Margaret Kaine now lives in Leicester. She began writing ten years ago and her short stories have been published in women's magazines in Great Britain, Ireland, Australia, South Africa and Norway. She won the 2002 Romantic Novelists' Association New Writer's Award for her first novel, RING OF CLAY.

GOR000871254
Friends and Families by Margaret Kaine
Margaret Kaine
Used - Very Good
Paperback
Hodder & Stoughton General Division
2006-01-30
464
0340828293
9780340828298
N/A
Book picture is for illustrative purposes only, actual binding, cover or edition may vary.
This is a used book - there is no escaping the fact it has been read by someone else and it will show signs of wear and previous use. Overall we expect it to be in very good condition, but if you are not entirely satisfied please get in touch with us.