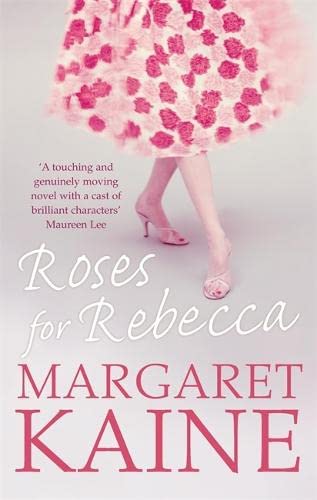 Roses For Rebecca
by Margaret Kaine

Roses For Rebecca by Margaret Kaine

An enthralling story of love, tragedy and renewal set in East London and the Potteries as England recovers from World War II.

Rebecca Lawson, orphaned and homeless, returns to London to live and work with her aunt and uncle at the Unicorn, their pub in the East End. Then one fateful day, Ian Beresford walks into the bar, and eighteen-year-old Rebecca, longing for security and a home of her own, falls deeply in love.

But Ian, so sensitive and caring, disappears and Rebecca discovers to her horror that she's pregnant. Frantic with worry, she travels to his family home in Stoke-on-Trent to try and find him. But awaiting her is the shocking news of an appalling tragedy.

Once again Rebecca struggles to pick up the shattered pieces of her life, and makes the difficult and brave decision to keep her baby. Despite scandal, prejudice and her own heartbreak, can she put the past behind her and find happiness after all?

'A touching and genuinely moving novel with a cast of brilliantly drawn characters.' * Maureen Lee, on ROSES FOR REBECCA *
A riveting story, absorbingly told * Ireland on Sunday on ROSEMARY *
'She has a real gift for characterisation, and for making the various people who bring her tales to vivid life totally believable.' * Leicester Mercury on ROSES FOR REBECCA *
A perfect novel . . . Kaine is great at conveying the tough times following the Second World War. Beth is an inspiring heroine, and readers will love her rise from rags to riches * Irish Tatler on RING OF CLAY *
Kaine is a fantastic storyteller and has a knack for connecting with the reader and making her characters seem true to life * Woman's Way on ROSEMARY *
a sensitive and well-crafted portrayal of a young unmarried girl . . . How true to life it seemed. A good read. * Historical Novels Review *

Born and educated in Stoke-on-Trent, Margaret Kaine now lives in Leicester. She began writing ten years ago and her short stories have been published in women's magazines in Great Britain, Ireland, Australia, South Africa and Norway.

GOR000615413
Roses For Rebecca by Margaret Kaine
Margaret Kaine
Used - Very Good
Paperback
Hodder & Stoughton
2007-06-14
480
034092392X
9780340923924
N/A
Book picture is for illustrative purposes only, actual binding, cover or edition may vary.
This is a used book - there is no escaping the fact it has been read by someone else and it will show signs of wear and previous use. Overall we expect it to be in very good condition, but if you are not entirely satisfied please get in touch with us.