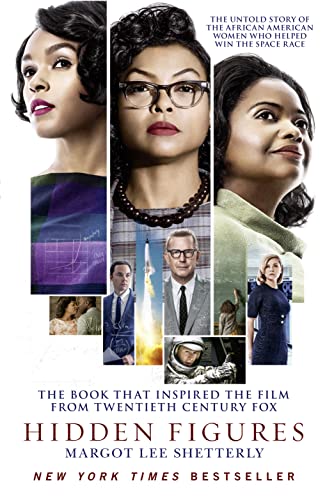 Hidden Figures: The Untold Story of the African American Women Who Helped Win the Space Race by Margot Lee Shetterly

Before Neil Armstrong walked on the moon, a group of professionals worked as `Human Computers', calculating the flight paths that would enable these historic achievements. Among these were a coterie of bright, talented African-American women. Segregated from their white counterparts, these `colored computers' used pencil and paper to write the equations that would launch rockets, and astronauts, into space.

Moving from World War II through NASA's golden age, touching on the civil rights era, the Space Race, the Cold War, and the women's rights movement, Hidden Figures interweaves a rich history of mankind's greatest adventure with the intimate stories of five courageous women whose work forever changed the world.

`Clearly fueled by pride and admiration, a tender account of genuine transcendence and camaraderie.
The story warmly conveys the dignity and refinements of these women' New York Times Book Review

`Much as Tom Wolfe did in `The Right Stuff', Shetterly moves gracefully between the women's lives and the broader sweep of history ... Shetterly blends impressive research with an enormous amount of heart in telling these stories ... Genuinely inspiring book' Boston Globe

`Shetterly's highly recommended work offers up a crucial history that had previously and unforgivably been lost. We'd do well to put this book into the hands of young women who have long since been told that there's no room for them at the scientific table' Library Journal

`This an is incredibly powerful and complex story, and Shetterly has it down cold. The breadth of her well-documented research is immense, and her narrative compels on every level. The timing of this revelatory book could not be better, and book clubs will adore it' Booklist

`Meticulous ... the depth and detail that are the book's strength make it an effective, fact-based rudder with which would-be scientists and their allies can stabilise their flights of fancy' Seattle Times

Margot Lee Shetterly is an independent scholar and an Alfred P. Sloan Foundation award recipient, currently at work on The Human Computer Project, a digital archive of the stories of NASA's female Human Computers. She is one of the founders of Inside Mexico Magazine, an English-language magazine for Mexico's expat population, and in her former lives worked as an Internet executive and an investment banker. She splits her time between Hampton, Virginia and Valle de Bravo, Mexico.

GOR008150372
Hidden Figures: The Untold Story of the African American Women Who Helped Win the Space Race by Margot Lee Shetterly
Margot Lee Shetterly
Used - Very Good
Paperback
HarperCollins Publishers
2016-12-19
384
0008201323
9780008201326
N/A
Book picture is for illustrative purposes only, actual binding, cover or edition may vary.
This is a used book - there is no escaping the fact it has been read by someone else and it will show signs of wear and previous use. Overall we expect it to be in very good condition, but if you are not entirely satisfied please get in touch with us
Trustpilot