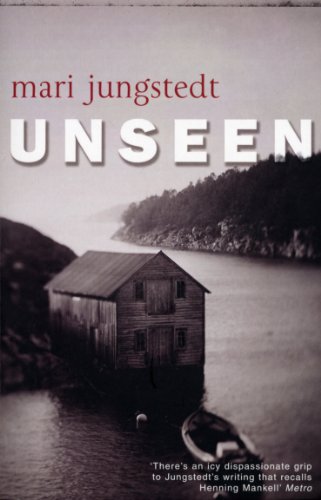 In Stock
£4.49
Inspector Knutas must face up to the horrifying prospect that there is a serial killer loose on the island. All that is clear is that the two victims are just the beginning, unless Knutas and Berg find the killer before he strikes again.
Very Good
5 in stock

'There is an icy, dispassionate grip to Jungstedt's writing that recalls Henning Mankell' Metro The first body they found was the dog. The poor creature's throat has been cut, and one paw severed completely. Then they found the body of the woman. She had been stabbed, again and again; she was naked, a piece of cloth had been stuffed into her mouth. The picturesque holiday island of Gotland is in the middle of a busy tourist season when the young woman is discovered murdered. Suspicion falls on her husband - the couple had been seen fighting the evening before. Inspector Anders Knutas is hoping it will be a straight-forward case; the local authorities are hoping so too, but more out of an interest in protecting the tourist trade than any desire to see justice served. Then another victim is discovered, again she is a young woman and she has been murdered in the same chilling manner. Inspector Knutas must face up to the horrifying prospect that there is a serial killer loose on the island. Knutas, aided by investigative journalist Johan Berg, begins to piece together the tragic history that unites the two victims, and alarmingly points to more murders to come. The killer remains unknown, moving freely, unseen, on the island. All that is clear is that the two victims are just the beginning, unless Knutas and Berg find the killer before he strikes again.

"Just when I thought that the flow of impressive crime writers from the Nordic countries was slowing down, up pops another. Unseen is the Swede Mari Jungstedt's first novel, but it doesn't feel like it. She is in total control of plot and pace, conveys chilling atmosphere and her characters are well above average for believability." -- Marcel Berlins * The Times *
"There is an icy dispassionate grip to Jungstedt's writing that recalls Henning Mankell." * Metro *

Mari Jungstedt is one of the most successful crime fiction authors in Sweden, and has sold over 3 million copies of her books worldwide. Barry Forshaw writes that her Inspector Knutas novels are 'among the most rarefied and satisfying pleasures afforded by the field'. She has written nine novels set on the island of Gotland and featuring Knutas. Mari lives in Stockholm with her husband and two children.

GOR001110738
Unseen: Anders Knutas series 1 by Mari Jungstedt
Mari Jungstedt
Anders Knutas
Used - Very Good
Paperback
Transworld Publishers Ltd
2008-01-01
368
0552155098
9780552155090
N/A
Book picture is for illustrative purposes only, actual binding, cover or edition may vary.
This is a used book - there is no escaping the fact it has been read by someone else and it will show signs of wear and previous use. Overall we expect it to be in very good condition, but if you are not entirely satisfied please get in touch with us.