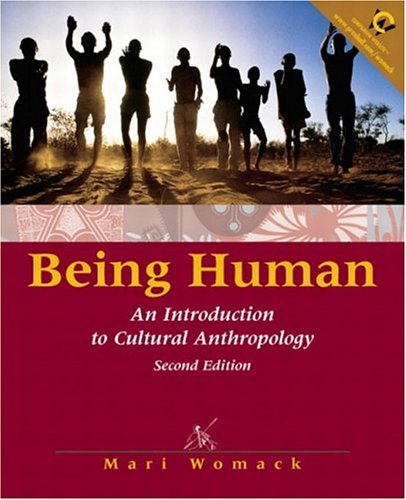 Being Human
by Mari Womack

In Stock
£5.99
Combining the features of an introductory text with the vitality of ethnographic accounts, this book presents the concepts relating to culture and social organization, applies them to specific cultures, and concludes with a survey of issues and contributions in the field of anthropology. It is useful for courses in Cultural Anthropology.
Very Good
Only 1 left

Being Human: An Introduction to Cultural Anthropology by Mari Womack

For introductory courses in Cultural Anthropology.

Unlike other introductory texts which often present anthropology as a checklist of facts to be memorized, this lively, innovative text presents cultural anthropology as an adventure-focusing on students' curiosity about their own participation in humanness, and incorporating the excitement of field discoveries throughout. Combining the features of an introductory text with the vitality of ethnographic accounts, it first presents the basic concepts relating to culture and social organization, applies them to specific cultures, and concludes with a survey of contemporary issues and contributions in the field of anthropology.

DR. MARI WOMACK is a writer and anthropologist specializing in symbols, religion, gender, anthropological theory and methods, and American popular culture. A research scholar at the UCLA Center for the Study of Women, she is scriptwriter for the PBS television series Faces of Culture and co-editor of The Other Fifty Percent, a reader on gender. Dr. Womack hones her classroom skills by teaching at several California institutions, including UCLA and Santa Monica College. The Santa Monica College chapter of Alpha Gamma Sigma, the student honor society, presented her with its Instructional Excellence Award in spring 2000.

Formerly an international radio broadcaster for Voice of America, Dr. Womack has been quoted in The New York Times, The Los Angeles Times, and The Wall Street Journal, and has appeared on a number of television programs, including the Today show, applying anthropological insights to contemporary issues. As a journalist, she has reported on news events ranging from U.S. presidential elections to earthquakes. She has interviewed a number of distinguished subjects, from Benezir Bhutto of Pakistan, to Nobel Prize-winning scholars, to film stars.

Dr. Womack's current interests center on producing books on anthropology for the classroom and the general public. She has been asked to edit readers on psychological anthropology and comparative religion and has completed the writing stage for two books on symbols: Symbols and Meaning and Sport as Symbol: Images of the Athlete in Art, Literature and Song. Her book on symbols for the public will be called Gods, Heroes, and Demons: The Importance of Symbols in Everyday Life.

I. THE HUMAN PERSPECTIVE.

1. We the People.
2. People Looking at People.
3. The Adventure of Anthropology.

II. THE ORGANIZATION OF HUMAN GROUPS.

4. The Political Economy.
5. Culture in Its Material Context.
6. Sex, Marriage, and Family Relationships.

III. THE QUESTION OF MEANING.

VI. THE ADVENTURE OF ANTHROPOLOGY CONTINUES.

GOR010201001
Being Human: An Introduction to Cultural Anthropology by Mari Womack
Mari Womack
Used - Very Good
Paperback
Pearson Education (US)
2000-12-06
496
0130902969
9780130902962
N/A
Book picture is for illustrative purposes only, actual binding, cover or edition may vary.
This is a used book - there is no escaping the fact it has been read by someone else and it will show signs of wear and previous use. Overall we expect it to be in very good condition, but if you are not entirely satisfied please get in touch with us.