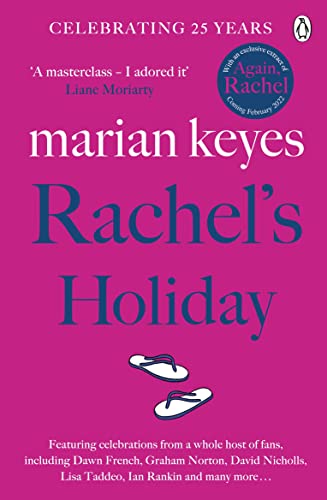 Used Price
£3.99
New RRP £8.99
Free Shipping in the UK
Rachel Walsh has a pair of size 8 feet and such a fondness for recreational drugs that her family has forked out the cash for a spell in Cloisters - Dublin's answer to the Betty Ford Clinic. She's only agreed to her incarceration because she's heard that rehab is wall-to-wall jacuzzis, and it's about time she had a holiday.
Very Good Good Well Read

Discover the deliciously dark and fantastically funny No. 1 bestseller about a woman living life rather too well and being whisked away from it all, from the No. 1 bestselling author of Grown Ups

'How did it end up like this? Twenty-seven, unemployed, mistaken for a drug addict, in a treatment centre in the back arse of nowhere with an empty Valium bottle in my knickers . . .'

She's been living it up in New York City, spending her nights talking her way into glamorous parties before heading home in the early hours to her hot boyfriend Luke.

But her sensible older sister showing up and sending her off to actual rehab wasn't quite part of her plan.

She's only agreed to her incarceration because she's heard that rehab is wall-to-wall jacuzzis, gymnasiums and rock stars going cold turkey - plus it's about time she had a holiday.

'A born storyteller' Independent on Sunday

'The voice of a generation' Daily Mirror

Deliciously dark and fantastically funny, Rachel's Holiday is the story of a young woman living life rather too well until the day she takes it too far endangering everything she cares about . . . * from the publisher's description *
It's full of LOLs, but also delivers a sucker-punch of emotion - a proper comfort-blanket book * Claire Frost, Fabulous magazine *
Keyes manages to have you alternately blubbing and belly-laughing to the final page * Company *
Gloriously funny * The Sunday Times *

Marian Keyes is the international bestselling author of Watermelon, Lucy Sullivan is Getting Married, Rachel's Holiday, Last Chance Saloon, Sushi for Beginners, Angels, The Other Side of the Story, Anybody Out There, This Charming Man, The Brightest Star in the Sky, The Mystery of Mercy Close and The Woman Who Stole My Life. Her journalism, collected under two titles, Making It Up As I Go Along and Under the Duvet: Deluxe Edition, containing the original publications Under the Duvet and Further Under the Duvet, are also available from Penguin.
Marian lives in Dublin with her husband.

GOR004369241
Rachel's Holiday by Marian Keyes
Marian Keyes
Used - Very Good
Paperback
Penguin Books Ltd
1997-11-06
656
0241958431
9780241958438
N/A
Book picture is for illustrative purposes only, actual binding, cover or edition may vary.
This is a used book - there is no escaping the fact it has been read by someone else and it will show signs of wear and previous use. Overall we expect it to be in very good condition, but if you are not entirely satisfied please get in touch with us.