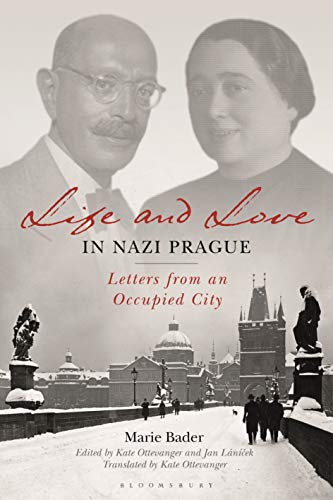 Life and Love in Nazi Prague
by Marie Bader

Life and Love in Nazi Prague: Letters from an Occupied City by Marie Bader

Prague, 1940-1942. The Nazi-occupied city is locked in a reign of terror under Reinhard Heydrich. The Jewish community experience increasing levels of persecution, as rumours start to swirl of deportation and an unknown, but widely feared, fate. Amidst the chaos and devastation, Marie Bader, a widow age 56, has found love again with a widower, her cousin Ernst Loewy. Ernst has fled to Greece and the two correspond in a series of deeply heartfelt letters which provide a unique perspective on this period of heightening tension and anguish for the Jewish community. The letters paint a vivid, moving and often dramatic picture of Jewish life in occupied Prague, the way Nazi persecution affected Marie, her increasingly strained family relationships, as well as the effect on the wider Jewish community whilst Heydrich, one of the key architects and executioners of the Holocaust and Reich Protector in Bohemia and Moravia, established the Theresienstadt ghetto and began to organize the deportation of Jews. Through this deeply personal and moving account, the realities of Jewish life in Heydrich's Prague are dramatically revealed.

This book is one more remarkable piece in the unknowable and uncompletable jigsaw of Jewry in the 1940s. * The Jewish Chronicle *
Life and Love in Nazi Prague, a collection of letters written during World War II, provides us with an extraordinary glimpse into the communication mechanisms and survival strategies not of those few who survived but of those many Jews who were murdered. The breathtaking letter exchange between Greek Thessaloniki and Czech Prague, once flourishing Jewish cities trapped under Nazi occupation, forces us to understand how time mattered and how little sense people could have of what nowadays tends to be so obvious. * Katerina Kralova, Assistant Professor of Russian and East European Studies, Charles University of Prague, Czech Republic *

Marie Bader (1886-1942) was born in Zebau and lived much of her life in nearby Karlsbad. This area of Bohemia was part of the Sudetenland and following Hitler's invasion in 1938, Marie fled to Prague. She was deported to Theresienstadt and from there to Eastern Poland where she was murdered.