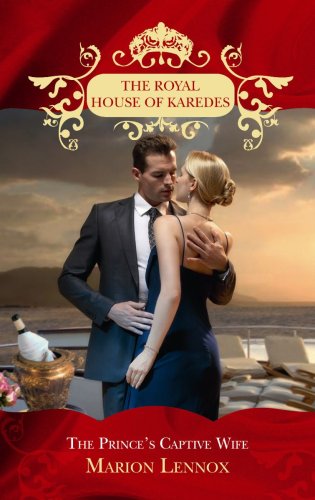 The Royal House of Karedes

The Prince's Captive Wife (The Royal House of Karedes, Book 3) by Marion Lennox

The Royal House of Karedes

Prince Andreas Karedes left Australia to inherit his royal duties, but unknown to him he left a woman pregnant. Innocent young Holly tragically lost their baby and remained on her parent's farm to be near her tiny son's final resting place, wishing Andreas would return!

A royal scandal is about to break: a dirt digging journalist has discovered Holly's secret and so Andreas forces his childhood sweetheart to come and face him! Passion runs high as Andreas issues an ultimatum - to avoid scandal Holly must become his royal bride!

Marion Lennox is a country girl, born on an Australian dairy farm. She moved on, because the cows just weren't interested in her stories! Married to a `very special doctor', she has also written under the name Trisha David. She's now stepped back from her `other' career teaching statistics. Finally, she's figured what's important and discovered the joys of baths, romance and chocolate. Preferably all at the same time! Marion is an international award winning author.

GOR001130400
The Prince's Captive Wife (The Royal House of Karedes, Book 3) by Marion Lennox
Marion Lennox
The Royal House of Karedes
Used - Very Good
Paperback
HarperCollins Publishers
2009-06-19
272
0263875520
9780263875522
N/A
Book picture is for illustrative purposes only, actual binding, cover or edition may vary.
This is a used book - there is no escaping the fact it has been read by someone else and it will show signs of wear and previous use. Overall we expect it to be in very good condition, but if you are not entirely satisfied please get in touch with us.