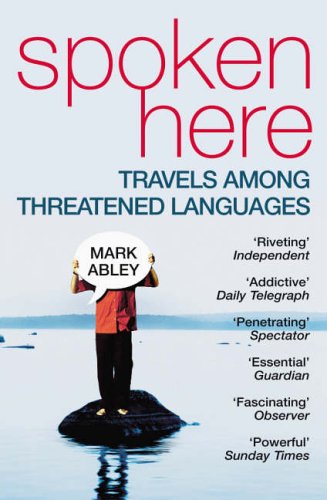 In Stock
£3.99
Half the world's languages are threatened with extinction over the next century, as English and the rest of the world's top twenty languages drive all before them.
Very Good Good
Only 3 left

Half the world's languages are threatened with extinction over the next century, as English and the rest of the world's top twenty languages drive all before them. What ways of looking at the world will die along with them, what cultural riches, what experiences, histories and memories? And how does it feel to be one of the last remaining speakers of a language that is on its way to extinction? What chance is there of saving any of these languages? Is it feasible in the long term or even worthwhile? Mark Abley's journeys among the speakers of languages at the brink takes him to aboriginal Australia (where he meets the last surviving fluent male speaker of Mati Ke, who cannot speak to the only other fluent speaker, as she is his sister and in their culture it is forbidden to speak to siblings once one has reached puberty) and to American Indian reservations, as well as to places where the languages are fighting back - Wales, the Faeroe islands, the Isle of Man - whilst also charting the triumphant return of Hebrew.

"Riveting... learned, thought-provoking, bouncing with ideas, yet funny and wry... Inspiring" * Independent *
"A fascinating and addictive book. It is more than that: it is a lucid, often eloquent journey through the crumbling linguistic foundations of humanity" * Daily Telegraph *
"Unusually penetrating and astute" * Spectator *
"An essential read" * Guardian *
"Powerful and important... Compelling'" * Sunday Times *

Mark Abley, a winner of Canada's National Newspaper Award, is the author of nine critically-acclaimed books, ranging from children's fiction to poetry, via journalistic non-fiction. He has written for the TLS, the Toronto Globe and Mail and the Montreal Gazette, amongst other publications. Winning a Guggenheim Fellowship in 2005 inspired his 2008 book The Prodigal Tongue: Dispatches from the Future of English. He lives in Montreal and speaks English, French, and a little Welsh.

GOR001086716
Spoken Here by Mark Abley
Mark Abley
Used - Very Good
Paperback
Cornerstone
2005-01-06
336
009946022X
9780099460220
N/A
Book picture is for illustrative purposes only, actual binding, cover or edition may vary.
This is a used book - there is no escaping the fact it has been read by someone else and it will show signs of wear and previous use. Overall we expect it to be in very good condition, but if you are not entirely satisfied please get in touch with us.