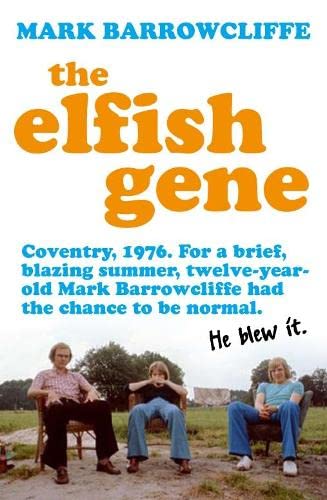 The Elfish Gene
by Mark Barrowcliffe

The Elfish Gene by Mark Barrowcliffe

Coventry, 1976. For a brief, blazing summer, twelve-year-old Mark Barrowcliffe had the chance to be normal.

While other teenagers concentrated on being coolly rebellious, Mark - like twenty million other boys in the `70s and '80s - chose to spend his entire adolescence in fart-filled bedrooms pretending to be a wizard or a warrior, an evil priest or a dwarf. Armed only with pen, paper and some funny-shaped dice, this lost generation gave themselves up to the craze of fantasy role-playing games, stopped chatting up girls and started killing dragons.

Extremely funny, not a little sad and really quite strange, The Elfish Gene is an attempt to understand the true inner nerd of the adolescent male. Last pick at football, spat at by bullies and laughed at by girls, they were the fantasy wargamers, and this is their story.

Mark Barrowcliffe grew up in Coventry. He worked as a journalist and as a stand up comedian before writing his hit first novel, Girlfriend 44 . He has written two other acclaimed comic novels, Lucky Dog and Infidelity For First-time Fathers. He lives in Brighton.

GOR001414358
The Elfish Gene by Mark Barrowcliffe
Mark Barrowcliffe
Used - Very Good
Paperback
Pan Macmillan
2008-04-04
352
0330445510
9780330445511
N/A
Book picture is for illustrative purposes only, actual binding, cover or edition may vary.
This is a used book - there is no escaping the fact it has been read by someone else and it will show signs of wear and previous use. Overall we expect it to be in very good condition, but if you are not entirely satisfied please get in touch with us.