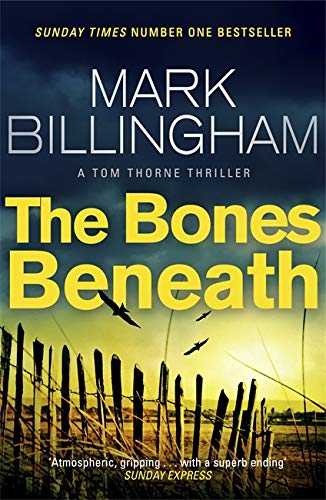 The Bones Beneath
by Mark Billingham

The Bones Beneath Summary

The Bones Beneath by Mark Billingham

Tom Thorne is back in charge - but there's a terrifying price to pay. Stuart Nicklin, the most dangerous psychopath he has ever put behind bars, promises to reveal the whereabouts of a body he buried twenty-five years before. But only if Thorne agrees to escort him.

Unable to refuse, Thorne gathers a team and travels to a remote Welsh island, at the mercy of the weather and cut off from the mainland. Thorne is determined to get the job done and return home before Nicklin can outwit them.

But Nicklin knows this island well and has had time to plan ahead. Soon, new bodies are added to the old, and Thorne finds himself facing the toughest decision he has ever had to make...

Tom Thorne returns in this utterly gripping, brilliantly plotted thriller. The Bones Beneath is Sunday Times bestseller Mark Billingham's most ambitious and accomplished work to date.

'One of the great series of British crime fiction' The Times

Customer Reviews - The Bones Beneath

The Bones Beneath Reviews

Brilliantly evoking the spooky island atmosphere, the tension of this macabre thriller is lightened by humour and believable characters * Sunday Mirror *
An atmospheric, gripping story with a superb ending * Sunday Express *
Strong plotting and an all-too-plausible villain reveal just how good Billingham is, and confirm Thorne as a memorable, flawed hero * Daily Mail *