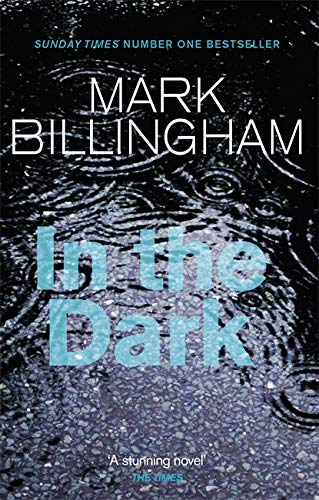 In The Dark by Mark Billingham

In The Dark by Mark Billingham

A rainy night in London. Shots are fired into a car which swerves on to the pavement, ploughing into a bus stop. It seems that a chilling gang initiation has cost an innocent victim their life. But the reality is far more sinister...

One life is wiped out and three more are changed forever: the young man whose finger was on the trigger; an ageing gangster planning a deadly revenge, and the pregnant woman who struggles desperately to uncover the truth. Two weeks away from giving birth, how will she deal with a world where death is an occupational hazard?

In a city where violence can be random or meticulously planned, where teenage gangs clash with career criminals and where loyalty is paid for in blood, anything is possible. Secrets are uncovered as fast as bodies, and the story's final twist is as breathtakingly surprising as they come.
________________

The outstanding new Tom Thorne thriller, THEIR LITTLE SECRET, is out now!

A stunning novel ... the final twist is brilliantly clever and shocking * The Times *
Billingham produces an astonishing final twist to complete his most ambitious and most accomplished book * Sunday Telegraph *
Chilling...A story with a twist that I guarantee even veteran crime fiction aficionados won't see coming * Evening Herald *
A virtuoso performance by Billingham * Daily Mail *
Mark Billingham has twice won the Theakston's Old Peculier Award for Crime Novel of the Year, and has also won a Sherlock Award for the Best Detective created by a British writer. Each of the novels featuring Detective Inspector Tom Thorne has been a Sunday Times bestseller. Sleepyhead and Scaredy Cat were made into a hit TV series on Sky 1 starring David Morrissey as Thorne, and a series based on the novels In the Dark and Time of Death was broadcast on BBC1. Mark lives in north London with his wife and two children.
GOR000722026
9780751539936
0751539937
In The Dark by Mark Billingham
Mark Billingham
Used - Very Good
Paperback
Little, Brown Book Group
2009-03-19
448
Short-listed for Theakston's Old Peculier Crime Novel of the Year 2010 (UK) Short-listed for CWA Gold Dagger for Fiction 2009 (UK)
Book picture is for illustrative purposes only, actual binding, cover or edition may vary.
This is a used book - there is no escaping the fact it has been read by someone else and it will show signs of wear and previous use. Overall we expect it to be in very good condition, but if you are not entirely satisfied please get in touch with us
Trustpilot