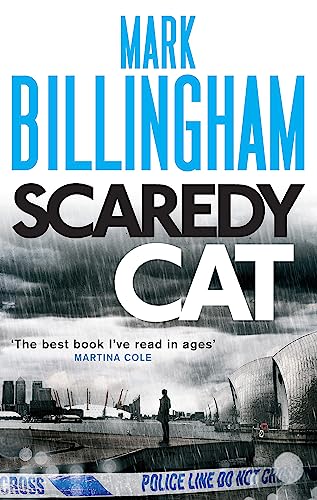 A gripping, chilling tour-de-force, Scaredy Cat is a perfect follow-up to Sleepyhead

The second book in the Tom Thorne series, from bestselling author Mark Billingham.

TWO WOMEN DEAD
It was a vicious, calculated murder. The killer selected his victim at Euston station, followed her home on the tube, strangled her to death in front of her child. At the same time, killed in the same way, a second body is discovered at the back of King's Cross station. And this grisly event eerily echoes the murder of two other women, stabbed to death months before on the same day.

TWO KILLERS WORKING TOGETHER
It is DI Tom Thorne who sees the link and comes to the horrifying conclusion. This is not a serial killer the police are up against. This is two of them - and two killers are way more deadly than one . . .
________________

The outstanding new Tom Thorne thriller, THEIR LITTLE SECRET, is out now!

Murder and mystery do not come better than this What's on in London Brisk, racy read The Times Assured and shocking thriller The Guardian A cunning variation on the serial-murder theme Sunday Telegraph
Mark Billingham has twice won the Theakston's Old Peculier Award for Crime Novel of the Year, and has also won a Sherlock Award for the Best Detective created by a British writer. Each of the novels featuring Detective Inspector Tom Thorne has been a Sunday Times bestseller. Sleepyhead and Scaredy Cat were made into a hit TV series on Sky 1 starring David Morrissey as Thorne, and a series based on the novels In the Dark and Time of Death was broadcast on BBC1. Mark lives in north London with his wife and two children.
GOR003994112
9780751548860
0751548863
Scaredy Cat by Mark Billingham
Mark Billingham
Tom Thorne Novels
Used - Very Good
Paperback
Little, Brown Book Group
2012-03-01
432
N/A
Book picture is for illustrative purposes only, actual binding, cover or edition may vary.
This is a used book - there is no escaping the fact it has been read by someone else and it will show signs of wear and previous use. Overall we expect it to be in very good condition, but if you are not entirely satisfied please get in touch with us
Trustpilot