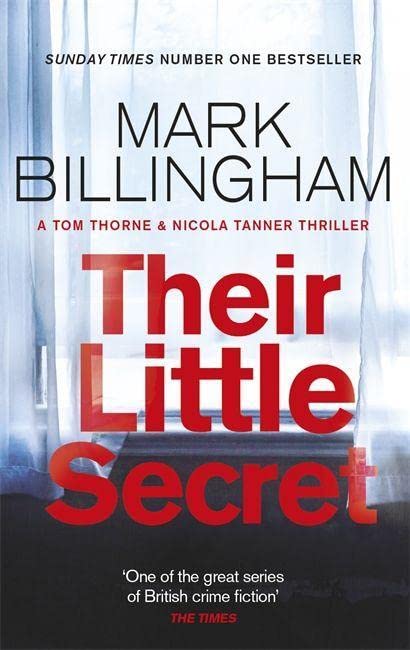 Their Little Secret
by Mark Billingham

In Stock
£3.59
The brand new thriller from five-million-copy bestseller Mark Billingham sees Tom Thorne and Nicola Tanner on the hunt for a couple whose mutual chemistry boils over into murder . . .
Very Good Good Well Read
189 in stock

Their Little Secret by Mark Billingham

The sixteenth book in the Tom Thorne series, from bestselling author Mark Billingham.

She says she's an ordinary mother.
He knows a liar when he sees one.

Sarah thinks of herself as a normal single mum. It's what she wants others to think of her. But the truth is, she needs something new, something thrilling.

Meanwhile, DI Tom Thorne is investigating a woman's suicide, convinced she was driven to do it by a man who preys on vulnerable women.

A man who is about to change Sarah's life.

From number one, five-million-copy bestseller Mark Billingham comes a breathless new thriller starring Thorne and Tanner that readers will devour.

'One of the great series of British crime fiction' THE TIMES

'A new Mark Billingham is always a treat' SUSIE STEINER

'Perfectly executed and with a thoroughly unnerving twist' GUARDIAN

Their Little Secret is a cracking read! It features one of the most twisted relationships I've ever read. I couldn't put it down! * Shari Lapena *
Mark Billingham is a damn fine storyteller whose thrilling books always satisfy. With a propulsive plot that is as gripping as it is unnerving, you will not be able to put this book down. Their Little Secret is an unforgettable ride * Karin Slaughter *
You think Billingham can't get better, and then along comes Their Little Secret, a twisted, and twisty psychological thriller, rich with character, insight and procedural detail. He is at the top of his game * Linwood Barclay *
One of the most compelling figures in contemporary crime fiction . . . Beautifully constructed and written, it pulses with the humanity that is Billingham's - and Thorne's - trademark * Daily Mail *
Hugely intelligent and authentic * Belinda Bauer, author of Snap *
Mark Billingham is one of the greatest writers in this, or any other genre * Steve Cavanagh *
I guarantee you won't see the ending coming. The Thorne books just keep getting better. Billingham is a superb crime writer with a sharp eye for detail and Thorne is one of the most interesting detectives in contemporary crime fiction -- Jake Kerridge * Daily Express *
Billingham scores even higher in his continuing brilliance in portraying Thorne the person -- Marcel Berlins * The Times *
Reliably ace * Heat *
His exploration of relationships makes this novel much more interesting than an ordinary straightforward police procedural * Literary Review *
Is there a more peerless crime writer at work today than Mark Billingham? There are few writers whose work I enjoy more * Crime Time *
You'll read over several days, but for which you give up sleep because you have to know what happens . . . It's a highly-recommended, brilliant book * The Book Bag *
The twisted plot unfolds gradually, with a maximum of suspense. Billingham never strains credulity in this thoughtful page-turner * Publishers Weekly *
An object lesson in how to take an established series into shockingly deep waters without losing the thread that keeps the franchise going * Kirkus *
This is a fantastic thriller, combining a gripping plot and lead characters of remarkable depth. A series to savor . . . it's impossible to put down Their Little Secret * Booklist *

GOR010282877
Their Little Secret by Mark Billingham
Mark Billingham
Tom Thorne Novels
Used - Very Good
Paperback
Little, Brown Book Group
2020-01-09
512
0751567000
9780751567007
N/A
Book picture is for illustrative purposes only, actual binding, cover or edition may vary.
This is a used book - there is no escaping the fact it has been read by someone else and it will show signs of wear and previous use. Overall we expect it to be in very good condition, but if you are not entirely satisfied please get in touch with us.