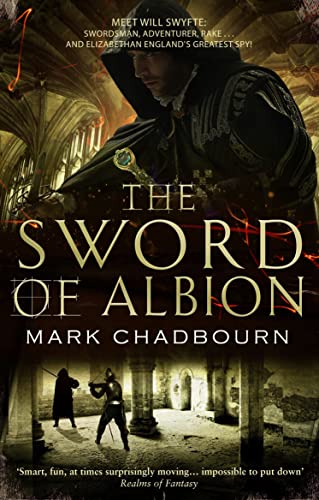 The Sword of Albion
by Mark Chadbourn

Used Price
£4.19
New RRP £14.99
Free Shipping in the UK
1588: as the Spanish Armada prepares to sail, rumours abound of a doomsday device that, were it to fall into enemy hands, could destroy England and her bastard queen once and for all.
Reviews:
Trustpilot
Very Good

The Sword of Albion Summary

1588: as the Spanish Armada prepares to sail, rumours abound of a doomsday device that, were it to fall into enemy hands, could destroy England and her bastard queen once and for all. Enter Will Swyfte. He is one of Walsingham's new breed of spy and his swashbuckling exploits have made him famous. However Swyfte's public image is a facade, created to give the people of England a hero in their hour of need - and to deflect attention from his real role: fighting a secret war against a foe infinitely more devilish than Spain... For millennia this unseen enemy has preyed upon humankind, treating honest folk as playthings to be hunted, taken and tormented. But now England is fighting back. Armed with little more than courage, their wits and an array of cunning gadgets created by sorcerer Dr Dee, Will and his colleagues must secure this mysterious device before it is too late. Theirs is a shadowy world of plot and counterplot, deception and betrayal, where no one - and nothing - is quite what they seem. At stake is the very survival of queen and country...

Customer Reviews - The Sword of Albion

The Sword of Albion Reviews

"Smart, fun, at times surprisingly moving, and occasionally downright shocking...impossible to put down." * Realms of Fantasy magazine *
"Combining the best elements of a spy thriller, heroic fantasy and Elizabethan mystery, Chadbourn deftly mixes gruesome brutality, a shadowy world of plots and counter-plots and a vivid cast of characters...creates an alternate reality as tangible and authentic as the history we think we know...In a year of outstanding fantasies, The Sword of Albion may just be one of the best so far." * Monsters and Critics *
"Gets off to a smashing start. The historical detail sets a believable backdrop, and the main character, a spy, could pass for a fantastical James Bond. Chadbourn sets a fast pace, pitting his characters against supernatural threats with a bit of horror thrown in." * RT Book Reviews *

A two-time winner of the British Fantasy Award, Mark Chadbourn is the author of eleven novels and one non-fiction book. Raised in the mining communities of South Derbyshire, he studied Economic History at Leeds before becoming a journalist. Now a screenwriter for BBC television drama, he has also run an independent record company, managed rock bands, worked on a production line and as an engineer's 'mate'. He lives in a forest in the Midlands. Visit www.markchadbourn.net

GOR002889109
The Sword of Albion: The Sword of Albion Trilogy Book 1 by Mark Chadbourn
Mark Chadbourn
Used - Very Good
Paperback
Transworld Publishers Ltd
2011-03-03
608
0553820214
9780553820218
N/A
Book picture is for illustrative purposes only, actual binding, cover or edition may vary.
This is a used book - there is no escaping the fact it has been read by someone else and it will show signs of wear and previous use. Overall we expect it to be in very good condition, but if you are not entirely satisfied please get in touch with us.