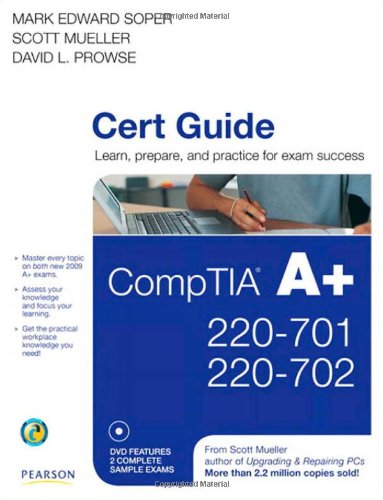 Master every A+ topic!

Test your knowledge, build your confidence, and succeed!

Mark Edward Soper has been working with PCs since the days of the IBM PC/XT and AT as a sales person, technology advisor, consultant, experimenter, and technology writer. Since 1992, he's taught thousands of students across the country how to repair, manage and troubleshoot the hardware, software, operating systems, and firmware inside their PCs. He's created many versions of his experimental computer known as "FrankenPC" for this and previous books. Mark earned his CompTIA A+ Certification in 1999 and has written two other A+ Certification books covering previous versions of the A+ Certification exams for Que Publishing.

Mark also stays busy on the Web, posting many blog entries and articles at MaximumPC.com, as well as writing articles for Maximum PC magazine. He has taught A+ Certification and other technology-related subjects at Ivy Tech State

Scott Mueller is president of Mueller Technical Research (MTR), an international research and corporate training firm. Since 1982, MTR has produced the industry's most in-depth, accurate, and effective seminars, books, articles, videos, and FAQs covering PC hardware and data recovery. MTR maintains a client list that includes Fortune 500 companies, the U.S. and foreign governments, major software and hardware corporations, as well as PC enthusiasts and entrepreneurs. Scott's seminars have been presented to several thousands of PC support professionals throughout the world.

Scott personally teaches seminars nationwide covering all aspects of PC hardware (including troubleshooting, maintenance, repair, and upgrade), A+ Certification, and data recovery/forensics. He has a knack for making technical topics not only understandable, but entertaining as well; his classes are never boring! If you have 10 or more people to train, Scott can design and present a custom seminar for your organization.

Scott's premiere work, Upgrading and Repairing PCs, has sold well over two million copies, making it by far the most popular and longest-running PC hardware book on the market today. Scott has been featured in Forbes magazine and has written several articles for PC World magazine, Maximum PC magazine, the Scott Mueller Forum, various computer and automotive newsletters, and the Upgrading and Repairing PCs website.

David L. Prowse is a computer network specialist, author, and technical trainer. As a consultant, he installs and secures the latest in computer and networking technology. Over the past several years, he has authored and co-authored a number of networking and computer titles for Pearson Education. In addition, over the past decade he has taught CompTIA A+, Network+, and Security+ certification courses to more than 2,000 students, both in the classroom and via the Internet.

Appendix A Answers to the "Do I Know This Already?" Quizzes and Troubleshooting