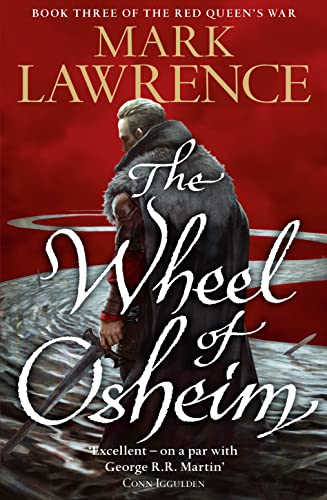 The Wheel of Osheim
by Mark Lawrence

From the critically-acclaimed author of PRINCE OF FOOLS comes the third volume of the brilliant new epic fantasy series, THE RED QUEEN'S WAR.

The Wheel of Osheim Summary

From the critically-acclaimed author of PRINCE OF FOOLS comes the third volume of the brilliant new epic fantasy series, THE RED QUEEN'S WAR.

All the horrors of Hell stand between Snorri Ver Snagason and the rescue of his family, if indeed the dead can be rescued.

For Jalan Kendeth getting out alive and with Loki's Key is all that matters. The key can open any lock and possession of it may enable Jal to to return to the three Ws that have been the core of his debauched life: wine, women, and wagering.

But the Wheel of Osheim is turning ever faster and it will crack the world unless it's stopped. When the end of all things looms, and there's nowhere to run, even the worst coward must find new answers

Customer Reviews - The Wheel of Osheim

The Wheel of Osheim Reviews

'There are special rewards in store here for readers of the Broken Empire series. Highly recommended' ROBIN HOBB

'Mark Lawrence is the best thing to happen to fantasy in recent years' PETER V. BRETT

'Marks an unbroken and steady ascent to the top of my favourite-fantasy pile. Lawrence gets better with each book he writes' MYKE COLE

'Lawrence improves with every book he writes and if he keeps on like this, we may have to turn the ratings system up to eleven. Magnificent, and highly recommended' Starburst Magazine

'The dialogue is a humorous, frightening lullaby that flawlessly depicts this dark, disturbing universe and its meticulously constructed characters, both friends and fiends' RT Book Reviews

Mark Lawrence was born in Champagne-Urbanan, Illinois, to British parents but moved to the UK at the age of one. He went back to the US after taking a PhD in mathematics at Imperial College to work on a variety of research projects including the 'Star Wars' missile defence programme. Returning to the UK, he has worked mainly on image processing and decision/reasoning theory. He says he never had any ambition to be a writer so was very surprised when a half-hearted attempt to find an agent turned into a global publishing deal overnight. His first trilogy, The Broken Empire, has been universally acclaimed as a ground-breaking work of fantasy. Mark is married, with four children, and lives in Bristol.

GOR008191416
The Wheel of Osheim (Red Queen's War, Book 3) by Mark Lawrence
Mark Lawrence
Red Queen's War
Used - Very Good
Paperback
HarperCollins Publishers
2017-02-20
672
000753163X
9780007531639
N/A
Book picture is for illustrative purposes only, actual binding, cover or edition may vary.
This is a used book - there is no escaping the fact it has been read by someone else and it will show signs of wear and previous use. Overall we expect it to be in very good condition, but if you are not entirely satisfied please get in touch with us.