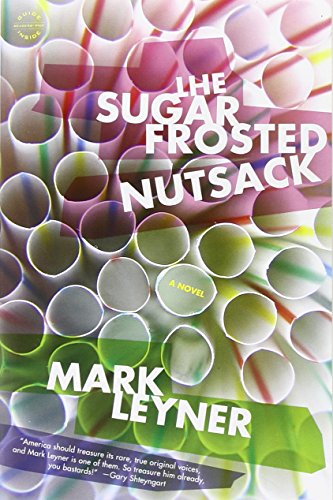 In Stock
£5.49
Now in paperback, a wildly fun romp through the excesses and exploits of gods and mortals with "Big ass brilliance on every sun-kissed page." (Sam Lipsyte)
Very Good
Only 2 left

High above the bustling streets of Dubai, in the world's tallest and most luxurious skyscraper, reside the gods and goddesses of the modern world. Since they emerged 14 billion years ago from a bus blaring a tune remarkably similar to the Mister Softee jingle, they've wreaked mischief and havoc on mankind. Unable to control their jealousies, the gods have splintered into several factions, led by the immortal enemies XOXO, Shanice, La Felina, Fast-Cooking Ali, and Mogul Magoo. Ike Karton, an unemployed butcher from New Jersey, is their current obsession.

Ritualistically recited by a cast of drug-addled bards, THE SUGAR FROSTED NUTSACK is Ike's epic story. A raucous tale of gods and men confronting lust, ambition, death, and the eternal verities, it is a wildly fun, wickedly fast gambol through the unmapped corridors of the imagination.

"The great Mark Leyner has returned. He's brought with him a visionary comedy, a nearly epic exegesis of a wonderfully ludicrous (and somehow completely believable) epic, and, most important, a pantheistic belief system we can all finally get behind. Big ass brilliance on every sun-kissed page." "Sam Lipsyte, author of "Home Land "and "The Ask"""
""The Sugar Frosted Nutsack" is dizzyingly brilliant. Mark Leyner is a hyperkinetic shaman, who flies the banner of rum and candy and writes like a one-eyed feral bandit. His new book is supremely original, delirious and synapse-shattering." "John Cusack""
"America should treasure its rare, true original voices and Mark Leyner is one of them. So treasure him already, you bastards!" "Gary Shteyngart, author of "Super Sad True Love Story"""
""The Sugar Frosted Nutsack" proves once again that Mark Leyner is a mad genius, one of the smartest and funniest humans since Aristophanes. The gods must be crazy for allowing him to write their collective biography. I want scrips for whatever drugs he's taking." "Jay McInerney, author of "Bright Lights, Big City" and "How It Ended"""
"This book did all kinds of things to my brain: squeezed it, shocked it, scrambled it and, finally, improved it. There is no one like Mark Leyner in fiction today, and with "The Sugar Frosted Nutsack," he has found--or invented--a language with which to render the insanity and self-referentiality of our contemporary culture. A chaotic and vibrant novel whose form is perfect for a chaotic and vibrant universe." "Charles Yu, author of "How to Live Safely in a Science Fictional Universe"""
"A total delight. Like tweaking out on a super trippy crystal meth high, but without the crash of annihilating depression that normally follows. Not that I really know this for sure since I've never actually been high." "Todd Solondz, director of "Welcome to the Dollhouse, Happiness, Storytelling," and "Palindromes"""

Mark Leyner is the author of the novels My Cousin, My Gastroenterologist, Et Tu, Babe and The Tetherballs of Bougainville. His nonfiction includes the #1 New York Times bestseller, Why Do Men Have Nipples? He cowrote the movie War, Inc. and lives in Hoboken, New Jersey.

GOR005030475
The Sugar Frosted Nutsack by Mark Leyner
Mark Leyner
Used - Very Good
Paperback
Little, Brown & Company
2013-03-10
256
031601897X
9780316018975
N/A
Book picture is for illustrative purposes only, actual binding, cover or edition may vary.
This is a used book - there is no escaping the fact it has been read by someone else and it will show signs of wear and previous use. Overall we expect it to be in very good condition, but if you are not entirely satisfied please get in touch with us.