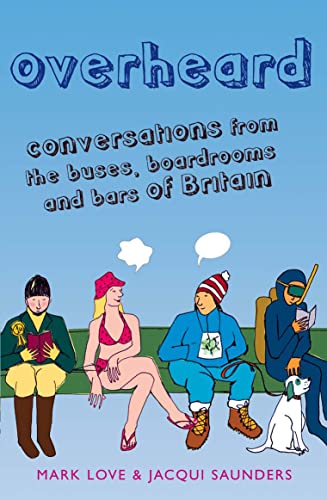 Conversations from the buses, boardrooms and bars of Britain

Conversations from the buses, boardrooms and bars of Britain

Think you've heard it all before? Think again with this hilarious collection of conversations from around Britain, overheard at tourist hotspots, in queues, at work and on public transport.

Packed full of verbal wit and gags it is guaranteed to get people talking and remember the stupid things that they have overheard.

A tired looking mother stands hands on hips in the play park watching her two young children tumble in the dirt.

A young Casanova is chattin' on his mobile, while sitting on a bus.

CASANOVA:
I am so glad you called sweet. Yeaaaahh. Girl I ain't sitting on no bus. I'm here, driving, yeah? Yeah, well you soon see it girl. You gonna come out with me tonight? Cooool. I'm sooo glad you called yeah? I was thinking 'bout you...let's meet up...where? Okay I'll take you there...Yeah I'll take you there girl. I won't bring my wheels if we'ze going there. Thas alright. Thas alright...I'll be there. What's your name girl..? I know what your name is girl, I want you to spell it. Donna, Dana! D-a-n-a yeah? I knew that. I am sooo glad you called yeah? I was thinking 'bout you.

A hilarious record of what people really do say. Watch out-you never know who might be listening!

Mark is a freelance writer and has written for Deal or No Deal, Celebrity Big Brother 7 and for Restoration. He was the sketch writer behind the Emmy Award winning TV comedy series Smack the Pony.

Jacqui Saunders has previously worked as a hand modeller, a muralist, an illustrator and a set and party stylist. She currently is a lecturer in art and design and writes for interior design publications.

Jacqui and Mark are married and live together with their two children in London.