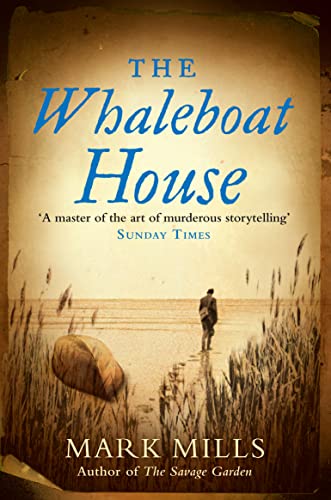 The Whaleboat House
by Mark Mills

From the No. 1 bestseller and author of Richard & Judy pick The Savage Garden: an award-winning crime novel set in post-war New York for fans of Carlos Ruiz Zafon and Jed Rubenfeld

The Whaleboat House by Mark Mills

From the No. 1 bestseller and author of Richard & Judy pick The Savage Garden: an award-winning crime novel set in post-war New York for fans of Carlos Ruiz Zafon and Jed Rubenfeld

The men of Long Island have fished the wild Atlantic waters over the centuries. For Conrad Labarde, recently returned from the Second World War, the nets hold a sinister catch - the body of Lillian Wallace, a beautiful New York socialite.

Is it an accident or murder? Police chief Tom Hollis is convinced the roots of the tragedy lie in the twisted histories of local families. But the enigmatic Labarde insists on pursuing his own investigation. It seems the fisherman may have powerful reasons for wanting answers to the questions surrounding her death. And in this strange place where tradition meets power and riches, the truth is a rare thing indeed...

Praise for The Whaleboat House:

`A very rich book - rich in detail and history and local color; rich in characters and conflict and mystery; and, most importantly, rich in wonderful writing' John Grisham

'Paced to perfection... a rich layering of character. Labarde in particular is a joy... a highly enjoyable murder investigation set against a backdrop of sumptuous local detail' The Times

'This is an intriguing, atmospheric, literary crime novel. The uneasy juxtaposition of two communities is brilliantly evoked by Mark Mills' Daily Mail

'A remarkable first novel. Written with all the wit, lyrical language and slow character development one would search for in the literary department, the book is as rich in time frame and location as any you'd find in the best historical fiction. Mills' tale gently yet persistently pulls readers in' LA Times

'Atmospheric thriller... good, strong characters and an intricate plot give this impressively written novel its gritty edge' Woman and Home

'Beautifully written, character-driven book, with its exotic Long Island sound locale and lyrical descriptions... Mark Mills has written a first novel that reverberates in the mind with the force of a literary epiphany' Irish Times

'Subtle and stylish. Mills is clever, unravelling the story from several angles' Observer

Mark Mills is a screenwriter. His film credits include The Reckoning, an adaptation of Barry's Unsworth's Morality Play, due for release in spring 2004. The Whaleboat House is his first novel.

GOR000962075
The Whaleboat House by Mark Mills
Mark Mills
Used - Very Good
Paperback
HarperCollins Publishers
2005-06-17
368
0007161921
9780007161928
N/A
Book picture is for illustrative purposes only, actual binding, cover or edition may vary.
This is a used book - there is no escaping the fact it has been read by someone else and it will show signs of wear and previous use. Overall we expect it to be in very good condition, but if you are not entirely satisfied please get in touch with us.