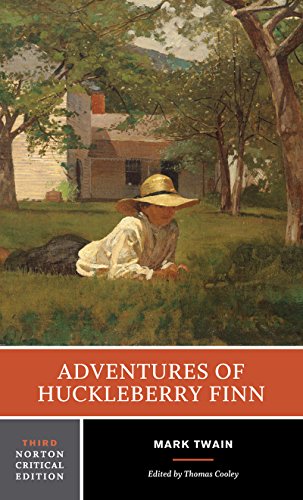 "Contexts and Sources" provides readers with a rich selection of documents related to the historical background, language, composition, sale, reception, and newly discovered first half of the manuscript of Mark Twain's greatest work. Included are letters on the writing of the novel, excerpts from the author's autobiography, samples of bad poetry that inspired his satire (including an effort by young Sam Clemens himself), a section on the censorship of Adventures of Huckleberry Finn by schools and libraries over a hundred-year period, and commentary by David Carkeet on dialects of the book and by Earl F. Briden on its "racist" illustrations. In addition, this section reprints the full texts of both "Sociable Jimmy," upon which is based the controversial theory that Huck speaks in a "black voice," and "A True Story, Repeated Word for Word As I Heard It," the first significant attempt by Mark Twain to capture the speech of an African American in print.

"A Chronology and Selected Bibliography" are also included.

Samuel Langhorne Clemens (1835-1910), best known to the world by his pen-name Mark Twain, was an author and humorist, noted for his novels The Adventures of Huckleberry Finn (1884), which has been called "the Great American Novel", and The Adventures of Tom Sawyer (1876, among many others. Thomas Cooley (PhD, Indiana University) is professor of English at The Ohio State University. In addition to Back to the Lake, he is the editor of The Norton Sampler, The Norton Critical Edition of Adventures of Huckleberry Finn and the author of several other books, among them Educated Lives: The Rise of Modern Autobiography in America and The Ivory Leg in the Ebony Cabinet: Madness, Race, and Gender in Victorian America.

GOR001529036
Adventures of Huckleberry Finn by Mark Twain
Mark Twain
Norton Critical Editions
Used - Very Good
Paperback
WW Norton & Co
1998-12-17
416
0393966402
9780393966404
N/A
Book picture is for illustrative purposes only, actual binding, cover or edition may vary.
This is a used book - there is no escaping the fact it has been read by someone else and it will show signs of wear and previous use. Overall we expect it to be in very good condition, but if you are not entirely satisfied please get in touch with us.