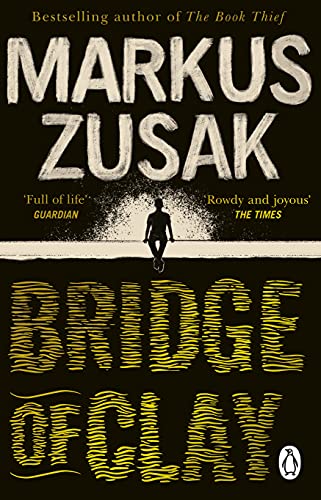 Bridge of Clay
by Markus Zusak

In Stock
£10.69
THE EPIC BESTSELLING NEW NOVEL FROM THE AUTHOR OF THE BOOK THIEF`If The Book Thief was a novel that allowed Death to steal the show...
New£10.69
5 in stock

Bridge of Clay by Markus Zusak

THE EPIC BESTSELLING NEW NOVEL FROM THE AUTHOR OF THE BOOK THIEF `If The Book Thief was a novel that allowed Death to steal the show... [its] brilliantly illuminated follow-up is affirmatively full of life' Guardian A lost typewriter -- A dead dog -- The bones of the snake that killed it Matthew Dunbar, eldest of five brothers, is on a journey to find them all. Only then can he tell the astonishing story of his family, rocked by tragedy and a long-buried secret. He will learn of a mother who crosses continents for a new home; of a father searching for love in the keys of an old piano; and, finally, of a brother named Clay, who will make the most challenging journey of them all, and change their lives for ever. An epic and spellbinding quest for redemption and greatness, Bridge of Clay will take you to many places, and will ask two eternal questions: where are you going, and who will you be when you get there ...? 'This is a tale of love, art and redemption; rowdy and joyous.' Times 'Bridge of Clay is one of those monumental books that can draw you across space and time' Washington Post 'This book blew me away' JODI PICOULT 'Devastating, demanding, deeply moving' Wall Street Journal 'Moving and epic' Stylist

"[Zusak] flings his readers straight into the deep end of his new vast, teeming novel . . . Warm and heartfelt . . . This is a tale of love, art and redemption; rowdy and joyous, with flashes of wit and insight, and ultimately moving." -- Kate Saunders * Times *
"If The Book Thief was a novel that allowed Death to steal the show... [its] brilliantly illuminated follow-up is affirmatively full of life." -- Alfred Hickling * Guardian *
"The wait is over." * New York Times *
"This vast novel is a feast of language and irony. There is sly wit on every page... it is hard not to fall a bit in love with it." -- Michael McGirr * Sydney Morning Herald *
"Bridge of Clay has been more than a decade in the making, and it shows: The characters are clearly loved, and the artistry of language will leave you gasping at times." * New York Times *
"Devastating, demanding and deeply moving, Bridge of Clay unspools like a kind of magic act in reverse" -- Meghan Cox Gurdon * Wall Street Journal *
"Eleven years after his multi-million selling hit The Book Thief, Zusak has returned with this sweeping and compelling family tale... Give it your time and you'll be repaid with a moving and epic read." * Stylist *
"Bridge of Clay is one of those monumental books that can draw you across space and time into another family's experience in the most profound way." -- Ron Charles * Washington Post *
"Exquisitely written ... A sensitively rendered tale of loss, grief, and guilt's manifestations" * Publisher's Weekly US *
"This book BLEW ME AWAY" * Jodi Picoult *
"A captivating book with a mighty, fearless heart, Bridge of Clay is filled with characters to believe in and care about ... achingly moving, delightfully funny, and thoroughly uplifting." * M L STEDMAN, bestselling author of THE LIGHT BETWEEN OCEANS *
"Unusual, boisterous and playful" * Good Housekeeping *
"This epic family saga is a sweeping reflection on love and loss etched in vibrant writing, vivid characterisations and heartfelt emotion . . . A book to lose yourself in on long autumn nights. " -- Charlotte Heathcote * Sunday Express *
"Markus Zusak crafts an unforgettable saga." * US Weekly *
"In a complex narrative that leaps through time and place and across oceans, Zusak paints a vivid portrait of the brothers trying to regain their balance by keeping their family's story alive." * Time *
"If The Book Thief is his most famous book, Bridge of Clay is his magnum opus." -- Clarissa Sebag-Montefiore * Guardian *
"[A] journey in a unique circumnavigatory style, blending past and present until we reach its heart-wrenching conclusion... The prose sings with spunky originality." * Irish Independent *
"A sweeping story following the five Dunbar brothers through times of grief, love, and anger, Bridge of Clay is a time-jumping, dreamlike exploration of family." * Entertainment Weekly *

MARKUS ZUSAK is the bestselling author of six novels, including THE BOOK THIEF. His books have been translated into more than forty languages, to both popular and critical acclaim. He lives in Sydney with his wife and two children. Find Markus on his blog www.zusakbooks.com Facebook /markuszusak Instagram @markuszusak .