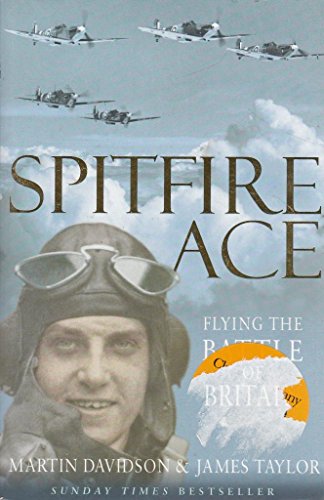 In Stock
£5.99
A Sunday Times top ten bestseller in hardcover, Spitfire Ace provides a vivid portrait of the few that flew in the Battle of Britain, 1940.
Very Good
Only 2 left

The Battle of Britain, 1940, was one of the most famous air battles in the history of warfare and it is a story of ruthless organisation, brilliant control and command. But at its heart is one particular figure, a legend ever since - the RAF fighter pilot. And one particular plane - a piece of machinery that has almost mythic historical glamour - the Supermarine Spitfire.

Spitfire Ace reintroduces the few that flew in the Battle of Britain and includes interviews with many of the surviving veteran Spitfire pilots. Combined with a historical narrative of the events surrounding the Battle of Britain, you will learn for the first time what it was really like to fly a Spitfire and to experience combat flying at its most visceral.

Fully illustrated with 16 pages of photographs and contemporary archive material, Spitfire Ace provides a vivid portrait of the fighter boys and their finest hour, their planes (including Spitfires, Hurricanes and Messerchmitts) and Fighter Command - RAF versus the Luftwaffe.

Martin Davidson is one of Britain's leading television producers, specializing in history and arts programmes. He was the executive produce of Channel 4's series Spitfire Ace and is the author of three other books: The Consumerist Manifesto (Routledge 1990); Decisive Weapons (BBC Books 1996); and A Visitor's Guide to a History of Britain (BBC Books 2002). James Taylor is a writer and television researcher. He joined RDF Media in 2001, where has worked on a broad range of series including Spitfire Ace and Carthage: The Roman Holocaust.

GOR000897022
Spitfire Ace by Martin Davidson
Martin Davidson
Used - Very Good
Paperback
Pan Macmillan
2004-09-03
256
0330435256
9780330435253
N/A
Book picture is for illustrative purposes only, actual binding, cover or edition may vary.
This is a used book - there is no escaping the fact it has been read by someone else and it will show signs of wear and previous use. Overall we expect it to be in very good condition, but if you are not entirely satisfied please get in touch with us.