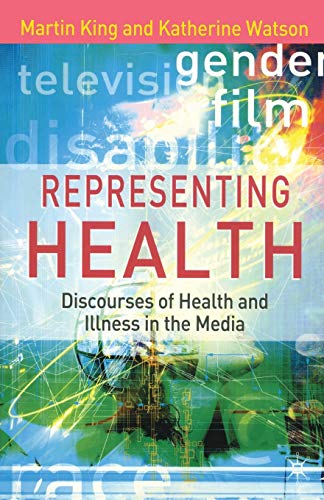 In Stock
£6.99
Representing Health addresses the importance of the media in shaping and reflecting public perceptions and attitudes to health and illness.
Very Good
Only 1 left

Representing Health: Discourses of Health and Illness in the Media by Martin King

Representing Health addresses the importance of the media in shaping and reflecting public perceptions and attitudes to health and illness. Bringing together contributions from a variety of academic disciplines, this lively text examines contemporary theoretical debates and analyzes media as diverse as television, cinema, literature, print media and the Internet. Centring around themes of 'virtual' bodies, audiences, representations and public health, it examines discourses of sexuality, gender, race, disability, childhood, medico-moral panics, regulation and governmentality.

MARTIN KING is Senior Lecturer and KATHERINE WATSON is Lecturer, both in the Department of Health Care Studies at Manchester Metropolitan University, UK

Introduction; M.King & K.Watson.- PART ONE: AUDIENCE RECEPTION STUDIES Public Medicine: The Reception of a Medical Drama; S.Davin.- Primitive Communications: The Case of the Radio Campaign for Asian Populations in the UK; Y.Doi.- Performing Disability: Impairment, Disability and Soap Opera Viewing; A.Wilde.- PART TWO: DISCOURSES OF HEALTH AND ILLNESS IN THE PRINT MEDIA AND THE INTERNET Threatened Children: Media Representations of Childhood Cancer; C.Seale.- Mad Cows and Mad Scientists: What Happened to Public Health in the Battle for the Hearts and Minds of the Great British Consumer?; M.King & C.Street.- Writing Digital Selves: Narratives of Health and Illness in the Internet; M.Hardey.- PART THREE: UNRULY BODIES AND THE MEDIA 'Planting Landmines in Their Sex Lives...': Governmentality, Iconography of Sexual Disease and the 'Duties' of the STD Clinic; A.Price.- Slicing Through Healthy Bodies: The Media Representation of Body Modification; K.Watson & S.Whittle.- Representing 'Healthy' and 'Sexual' Bodies: The Media, Disability and Consensual 'SM'; A.Beckmann.- PART FOUR: MORALITY AND HEALTH: DISCOURSES OF GOOD AND EVIL IN HEALTH TEXTS Dope Fiends: The Myth and Menace of Drug Users in Film; P.Guy.- Disease, Decay and Dread: Literary Constructions of Illness; A.Kershaw.

GOR004715321
Representing Health: Discourses of Health and Illness in the Media by Martin King
Martin King
Used - Very Good
Paperback
Palgrave Macmillan
2004-11-23
296
0333997875
9780333997871
N/A
Book picture is for illustrative purposes only, actual binding, cover or edition may vary.
This is a used book - there is no escaping the fact it has been read by someone else and it will show signs of wear and previous use. Overall we expect it to be in very good condition, but if you are not entirely satisfied please get in touch with us.