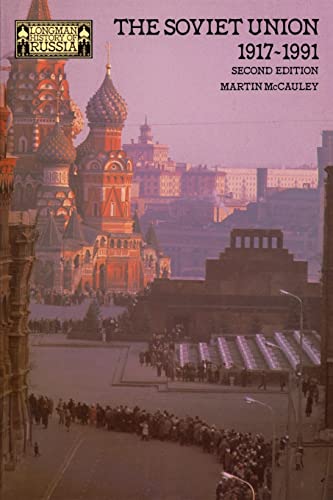 Out of Stock
£0.00
This well-established textbook provides a survey of the Soviet Union from its birth to its death. Including chapters on the New Economic Policy and World War II, the book focuses on the political, social, economic and religious developments to give a complete account of the Soviet years.
Very Good
Only 0 left

A second edition of this famous survey has been eagerly awaited. When the first edition appeared Brezhnev was still in power, Gorbachev did not make it to the index, and the USSR was a superpower. Today the Soviet experiment is over and the USSR no longer exists. How? Why? Martin McCauley has reworked and greatly expanded his book to answer these questions, and to provide a complete account of the Soviet years. Essential reading to an appreciation of recent history -- and to a better understanding of whatever happens next.

'An expert in probing mafia-type relationships in present-day Russia, Martin McCauley here offers a vigorously written scrutiny of Soviet politics and society since the days of Lenin and Stalin.'

Martin McCauley is former Senior Lecturer in Politics at the School of Slavonicand East European Studies, University College, University of London. His previous publications include Stalin and Stalinism (2003), Bandits, Gangsters and the Mafia: Russia, the Baltic States and the CIS Since 1991 (2001) and Gorbachev (2000).

GOR001211553
The Soviet Union 1917-1991 by Martin McCauley
Martin McCauley
Longman History of Russia
Used - Very Good
Paperback
Pearson Education Limited
1993-05-04
440
0582013232
9780582013230
N/A
Book picture is for illustrative purposes only, actual binding, cover or edition may vary.
This is a used book - there is no escaping the fact it has been read by someone else and it will show signs of wear and previous use. Overall we expect it to be in very good condition, but if you are not entirely satisfied please get in touch with us.