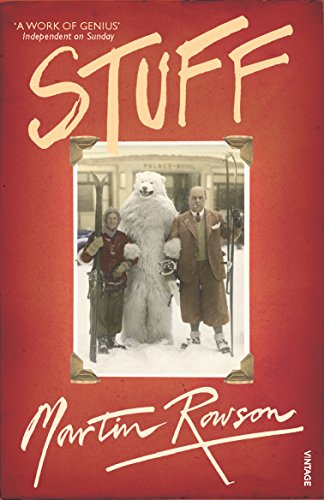 In Stock
£8.99
A few months after two of his parents had died, Martin Rowson had a dream about the house he grew up in which was crammed with tons and tons of stuff, both physical and emotional. weaving together dreams, family anecdotes and gossip, jokes, advice, history, smells, sounds and sights of the past.
Very Good
Only 4 left

Stuff: A Memoir of Death and Life by Martin Rowson

A few months after two of his parents had died, Martin Rowson had a dream about the house he grew up in which was crammed with tons and tons of stuff, both physical and emotional. In this book Rowson delves into all that 'stuff'; weaving together dreams, family anecdotes and gossip, jokes, advice, history, smells, sounds and sights of the past. The result is a funny, thought-provoking and ultimately moving meditation on families, life, love, disease and the existentialist horrors of clearing out the attic.

"Martin Roswson's Stuff may actually be a work of genius... what really astonishes is the strange, robust gravity of the style, combined with an effortless talent for scenic arrangement that manages to fit innumerable disparate incidents into a wholly original shape... a genuinely mature work of commemoration and love, one always attentive to the nuance and texture of things" -- Tim Martin * Independent on Sunday *
"Absorbing and vivid.... the best and most touching element of Stuff is that, unlike so many memoirs concerning parents, it emphatically delivers... It is a lively and entertaining book, yet its earnest concern, in the end, is to examine what truly remains of the dead we have loved, and to face up to all the sorting" -- Lynn Truss * Sunday Times *
"Martin Rowson is one of the most viscerally distinctive and critically acclaimed cartoonists working in Britain today....Stuff is a rich and profoundly sensitive book" -- Stuart Kelly * Scotland on Sunday *
"He is a sensitive writer, capable of great subtlety and nuanced emotional gear-changes" -- William Leith * Guardian *
"A wonderful evocation of what it was like to grow up in the Sixties and Seventies. The writing is never less than pin-sharp...deeply moving" -- Kathryn Hughes * Mail on Sunday *

Martin Rowson is an award-winning political cartoonist whose work appears regularly in the Guardian, The Times, the Independent on Sunday, the Daily Mirror, the Scotsman, the Spectator, Tribune, Index on Censorship and The New Humanist. His previous publications include comic book adaptations of The Waste Land and Tristram Shandy and a novel, Snatches, published by Jonathan Cape in 2006. He lives with his wife in south-east London.

GOR000715713
Stuff: A Memoir of Death and Life by Martin Rowson
Martin Rowson
Used - Very Good
Paperback
Vintage Publishing
2008-04-03
336
0099502658
9780099502654
N/A
Book picture is for illustrative purposes only, actual binding, cover or edition may vary.
This is a used book - there is no escaping the fact it has been read by someone else and it will show signs of wear and previous use. Overall we expect it to be in very good condition, but if you are not entirely satisfied please get in touch with us.