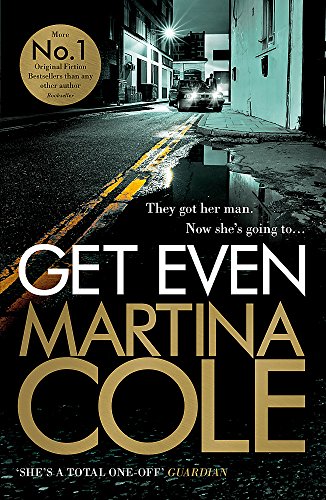 Get Even
by Martina Cole

Get Even: A dark thriller of murder, mystery and revenge by Martina Cole

They got her man. Now she's going to get even...

GET EVEN, by the 'undisputed queen of crime writing' (Guardian) and Sunday Times No.1 bestseller Martina Cole tells the hard-hitting tale of the fearless Sharon Conway as she finally gets her shot at revenge...

Sharon Conway and Lenny Scott are childhood sweethearts. Everyone says they are too young, but nothing can keep them apart. Sharon doesn't question Lenny's business dealings and it isn't long before his reputation as a hard man destined for the top means they are living the good life with their sons.

But one night Lenny doesn't come home. It isn't the first time he has gone AWOL. But it is his last. He is found murdered - beaten to death in an act of brutality that shocks even the police. And Sharon never knows why.

Now, twenty years later, Sharon is about to find out the truth. Such a crime cannot go unpunished. Revenge is long overdue. The time has come to... GET EVEN.

If you love powerful female characters, be sure to also read Martina Cole's GOODNIGHT LADY, THE KNOW and CLOSE. These ladies are strong, resilient and vengeful...

GOR007989973
Get Even: A dark thriller of murder, mystery and revenge by Martina Cole
Martina Cole
Used - Like New
Paperback
Headline Publishing Group
2016-06-30
560
1472201019
9781472201010
N/A
Book picture is for illustrative purposes only, actual binding, cover or edition may vary.
The book has been read, but looks new. The book cover has no visible wear, and the dust jacket is included if applicable. No missing or damaged pages, no tears, possible very minimal creasing, no underlining or highlighting of text, and no writing in the margins.