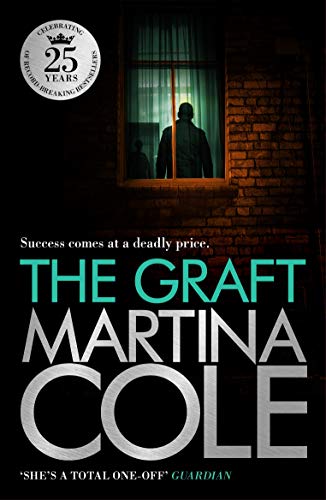 The Graft
by Martina Cole

THE GRAFT: Martina Cole's stories expose a world that many would rather ignore.

The Graft: A gritty crime thriller to set your pulse racing by Martina Cole

Success comes at a deadly price...

THE GRAFT by the 'undisputed queen of crime writing' (Guardian) and Sunday Times No.1 bestseller Martina Cole is an unflinching novel that exposes a world that many would rather ignore...

When Nick Leary hears the sound of an intruder's footsteps downstairs one night, something inside him snaps. The thought of losing his beautiful wife and sons, their luxurious home and possessions, everything he's grafted for, pushes him to attack.

But this single act sets in motion something way beyond Nick's control.
He's picked the wrong fight this time, and now it's too late to go back...

For more novels that will take you deep into the dark and dangerous criminal underworld, check out Martina Cole's THE BUSINESS, THE LIFE and REVENGE

'Cole is brilliant at portraying the good among the bad, and vice versa, so until the very end we never quite know who to trust. This is the very stuff that makes her so compelling' Daily Mirror No one writes about East End women and their vagaries like Martina Cole Maxim Jakubowski, Murder One 'A powerful novel that pulls no punches... Cole has an ear for the vernacular of the East End, as well as an ability to portray the viciousness of life at the edge' the Guide Guide 'Right from the start [Cole] has enjoyed unqualified approval for her distinctive and powerfully written fiction' The Times Intensely readable Guardian 'Martina Cole explores the shady criminal underworld, a setting she is fast making her own' Sunday Express 'Utterly compelling' Mirror 'The story will grip you from the first pages' Best 'Gritty novel from an author who knows intimately the world she writes about' Express

GOR002472470
The Graft: A gritty crime thriller to set your pulse racing by Martina Cole
Martina Cole
Used - Very Good
Paperback
Headline Publishing Group
2010-11-11
528
0755374134
9780755374137
N/A
Book picture is for illustrative purposes only, actual binding, cover or edition may vary.
This is a used book - there is no escaping the fact it has been read by someone else and it will show signs of wear and previous use. Overall we expect it to be in very good condition, but if you are not entirely satisfied please get in touch with us.