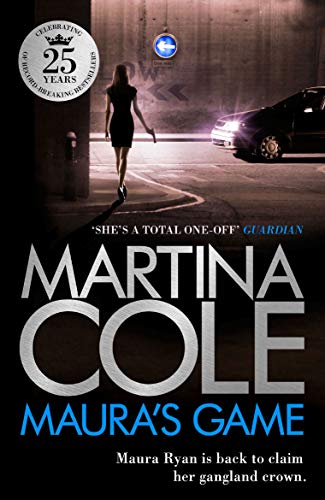 MAURA'S GAME: the electrifying sequel to the book that made Martina Cole's name.

Maura's Game: A gripping crime thriller of danger, determination and one unstoppable woman by Martina Cole

Maura Ryan is back to claim her gangland crown...

MAURA'S GAME is the unputdownable sequel to DANGEROUS LADY, the iconic first novel by Sunday Times No.1 bestseller Martina Cole which catapulted her to fame and made her the 'undisputed queen of crime writing' (Guardian).

Maura Ryan was the queen of the criminal underworld when she pulled off the most audacious gold bullion robbery of all time. Since then, she's retired from a life of crime to be with the only man she's ever loved.

But enemies from her past are closing in and they're about to learn that they should never cross Maura Ryan. The dangerous lady is back and she's as lethal as ever...

We know you'll be hooked on Maura Ryan, so be sure to first read the gripping prequel to MAURA'S GAME, DANGEROUS LADY.

'Cole is brilliant at portraying the good among the bad, and vice versa, so until the very end we never quite know who to trust. This is the very stuff that makes her so compelling' Daily Mirror 'Right from the start [Cole] has enjoyed unqualified approval for her distinctive and powerfully written fiction' The Times Intensely readable Guardian 'Martina Cole explores the shady criminal underworld, a setting she is fast making her own' Sunday Express 'Utterly compelling' Mirror 'The story will grip you from the first pages' Best 'Gritty novel from an author who knows intimately the world she writes about' Express

GOR002358638
Maura's Game: A gripping crime thriller of danger, determination and one unstoppable woman by Martina Cole
Martina Cole
Used - Very Good
Paperback
Headline Publishing Group
2010-08-05
560
0755374118
9780755374113
N/A
Book picture is for illustrative purposes only, actual binding, cover or edition may vary.
This is a used book - there is no escaping the fact it has been read by someone else and it will show signs of wear and previous use. Overall we expect it to be in very good condition, but if you are not entirely satisfied please get in touch with us.