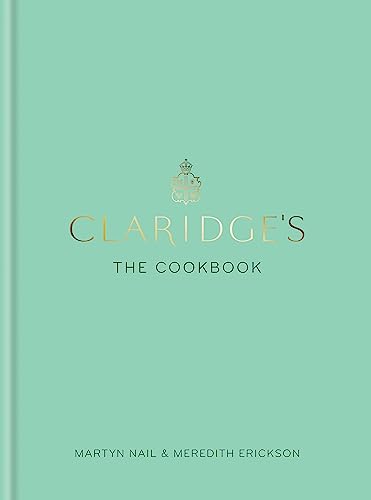 Claridge's: The Cookbook
by Martyn Nail

Out of Stock
£12.99
The debut cookbook from London's legendary luxury hotel.
Very Good
Only 0 left

Claridge's: The Cookbook by Martyn Nail

"Claridge's: The Cookbook is a sophisticated addition to your cookbook collection - and a purse-friendly alternative to an overnight stay." Stylist "...not that I intend to die, but when I do, I don't want to go to heaven, I want to go to Claridge's" Spencer Tracy "I love to check myself into Claridge's now and then for a few nights - just to spoil myself" Jade Jagger "When I pass through the revolving doors into the glamorous lobby of Claridge's in London, I always feel a thrill. You enter a world of sophistication and wonderful service... Claridge's is my ultimate treat." Lulu Guinness "It's the best in the world" Alex James

An art deco jewel set in the heart of London's Mayfair, Claridge's - one of the world's best luxury hotels - has long been known for inspiring menus and exceptional dining from breakfasts and elevenses, through lunch and afternoon tea, and on to drinks, dinner and the dessert cart. Claridge's: The Cookbook celebrates that heritage in style, with a collection of over 100 of the best-loved dishes and drinks from The Foyer and Reading Room, the Bar and The Fumoir. With interludes ranging from the magic of Christmas to how to host dinner for 100, the extraordinary experience of dining at Claridge's is brought to life in book form.

The book will include delectable dishes and drinks for every time of day: from the Arnold Bennett omelette, to the Lobster, langoustine & crab cocktail and the Smoked duck salad. Treats include Cheddar Eccles cakes and a Raspberry marshmallow. Savour everything from the prized Claridge's chicken pie to a slice of Venison Wellington, with some Truffled macaroni gratin or Pommes chateau.

Share the essence of Claridge's with family and friends, in the comfort of your own home - and enjoy!

Martyn Nail (Author)
Martyn was first inspired to cook by his grandmother and was baking his own cakes by the age of eight. He earned his catering diploma from Highbury College in 1986, top in his field with distinction. Two years later, Martyn started work at Claridge's as Third Commis Chef under Maitre Chef des Cuisines Marjan Lesnik and later under John Williams. Over the years Martyn rose through the ranks to become the hotel's highly respected Executive Chef in 2004. Under Martyn's direction, Claridge's iconic afternoon tea won the British Tea Guild Best Afternoon Tea award twice. Martyn has worked tirelessly to make the Claridge's Foyer and Reading Room into one of London's most happening venues for lunch and dinner.

Meredith Erickson (Author)
Meredith has written for The New York Times, Elle, enRoute, Food and Wine and Lucky Peach. She co-authored The Art of Living According to Joe Beef cookbook, which was nominated for a James Beard award in 2012. She also co-wrote the Le Pigeon: Cooking at the Dirty Bird (2013) and Olympia Provisions (2015) cookbooks. Meredith divides her time between Montreal and London.

GOR008749712
Claridge's: The Cookbook by Martyn Nail
Martyn Nail
Used - Very Good
Hardback
Octopus Publishing Group
2017-10-05
256
1784723290
9781784723293
N/A
Book picture is for illustrative purposes only, actual binding, cover or edition may vary.
This is a used book - there is no escaping the fact it has been read by someone else and it will show signs of wear and previous use. Overall we expect it to be in very good condition, but if you are not entirely satisfied please get in touch with us.