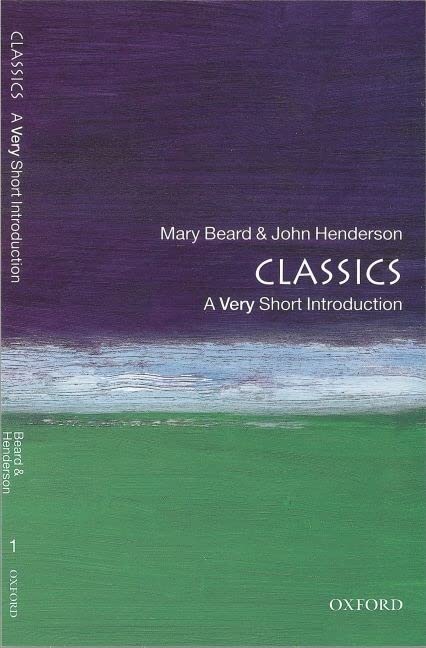 Starting with a visit to the British Museum, the authors prompt us to consider the significance of Classics as a means of discovery and enquiry, its value in terms of literature, philosophy, and culture, and its importance as a source of imagery.

This Very Short Introduction to Classics links a haunting temple on a lonely mountainside to the glory of ancient Greece and the grandeur of Rome, and to Classics within modern culture-from Jefferson and Byron to Asterix and Ben-Hur. We are all Classicists - we come into touch with the Classics daily: in our culture, politics, medicine, architecture, language, and literature. What are the true roots of these influences, however, and how do our interpretations of these aspects of the Classics differ from their original reception? This introduction to the Classics begins with a visit to the British Museum to view the frieze which once decorated the Apollo Temple at Bassae. Through these sculptures, John Henderson and Mary Beard prompt us to consider the significance of Classics as a means of discovery and enquiry, its value in terms of literature, philposophy, and culture, and its importance as a source of imagery. ABOUT THE SERIES: The Very Short Introductions series from Oxford University Press contains hundreds of titles in almost every subject area. These pocket-sized books are the perfect way to get ahead in a new subject quickly. Our expert authors combine facts, analysis, perspective, new ideas, and enthusiasm to make interesting and challenging topics highly readable.
this short and brilliant book ... is now re-issued in an attractive pocket-sized format ... amazing range of reference ... very clear organisation. JT, Anglo-Hellenic Review, No.22, 2000.
nobody could fail to be informed and entertained - and the accent of the book is provocative and stimulating. * TLS *
Lively, and up-to-date...it shows classics as a living enterprise, not a warehouse of relics. * New Statesman and Society *
Beard and Henderson have suceeded brilliantly in communicating the sheer breadth of Classics in this Very Short Introduction.... In language accessible to non-specialist and student alike, Beard and Henderson illustrate how Classic encompasses not just a study of the ancient world, but also of its traditions of scholarship and its influence on the culture of the western world...... This book does not fail to challenge and provoke. Nor does it ignore the problems and current issues that beset the subject and its teaching, but presents them even handedly and with humour, eschewing propaganda.... A stimulating addition to the school library. * JACT review *
The authors show us that Classics is a 'modern' and sexy subject. They succeed brilliantly in this regard nobody could fail to be informed and entertained-and the accent of the book is provocative and stimulating. * John Goodwin, Times Literary Supplement *
Statues and slavery, temples and tragedies, museum, marbles, and mythology-this provocative guide to the Classics demystifies its varied subject-matter while seducing the reader with the obvious enthusiasm and pleasure which mark its writing. * Edith Hall, author of Inventing the Barbarian *
You could not find two better introducers to the Classics than Mary Beard and John Henderson. They are questioning, funny, bold, and widely read in many fields. They could not be dull if they tried. * Philip Howard, columnist for The Times *
This little book should be in the hands of every studentm and every tourist to the lands of the ancient world - a splendid piece of work. * Peter Wiseman, author of Talking to Virgil *
For those who think Classics is just the dry as dust learning of dead languages this arresting book will come as a rude shock. This is no potted history of Greece and Rome, but a brillian demonstration that the continual re-excavation of our classical past is vital if the modern world is to rise to the challenge inscribed on the temple of Apollo at Delphi to "Know yourself". * Robin Osborne, author of Demos: The Discovery of Classical Attica *
John Henderson is a Fellow of King's College, Cambridge, and Mary Beard is a Fellow of Newnham College, Cambridge.
1. THE VISIT 2. ON SITE 3. BEING THERE 4. A GUIDE IN HAND 5. BENEATH THE SURFACE 6. GRAND THEORIES 7. THE ART OF RECONSTRUCTION 8. THE GREATEST SHOW ON EARTH 9. IMAGINE THAT 10. 'ET IN ARCADIA EGO' OUTLINE OF BASSAE FRIEZE TIMELINES CITATIONS AND FURTHER READING INDEX
GOR001511941
9780192853851
0192853856
Classics: A Very Short Introduction by Mary Beard (Fellow, Fellow, Newnham College, Cambridge)
Mary Beard (Fellow, Fellow, Newnham College, Cambridge)
Very Short Introductions
Used - Very Good
Paperback
Oxford University Press
2000-02-24
160
N/A
Book picture is for illustrative purposes only, actual binding, cover or edition may vary.
This is a used book - there is no escaping the fact it has been read by someone else and it will show signs of wear and previous use. Overall we expect it to be in very good condition, but if you are not entirely satisfied please get in touch with us
Trustpilot